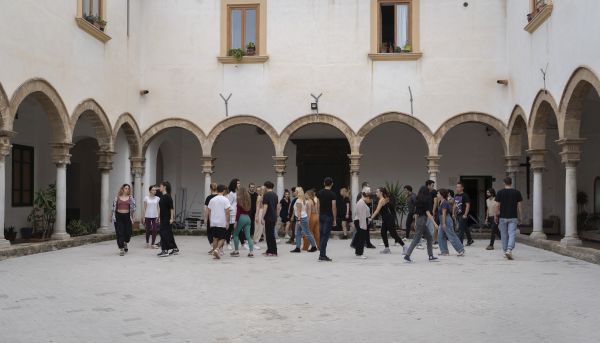 Mid-autumn in Palermo and a group of 45 young people meeting each other for the first time ready to take off on a journey that nobody knows where exactly it goes. Together, they followed the journey of AENEAS, the hero who left burning Troy in search of a new home. Heading the tribe, on the way they stepped on many lands, visited many places. In some places they were accepted with royal honours, from others they were thrown away. Through dancing and theatre techniques the whole team could explore deeper the story of Aeneas, as presented in Virgil’s Aeneid. Our aim wasn’t to stop there and we didn’t. We tried to imagine and explore in a corporeal way, through senses, body and mind what Aeneas experienced, and how this experience marked him on the one hand and European history on the other casting Aeneas “the first true hero of Rome”. The inevitable parallels with today led the group to reflect on what it means to be a migrant, how status can change and what it takes for a young person in Europe to stand for European values.

Testimonials of the participants

My first Erasmus program will always have a very special place in my heart. The ”Aeneas project” took place in Palermo, Italy and we were introduced to the theme of migration, anti-discrimination, and social inclusion with non-formal methods and through art. More specifically, in the mornings we were discussing these serious issues while sitting in a circle and co-configuration. We were equal and all of our voices mattered and were heard and respected. This was the most important part for me. We worked together to create a manifesto for solutions to these problems and it was great.

Afterwards, we explored these subjects through dance activities and theatrical rehearsals combining the Aeneas myth creating at the end a whole performance based on the myth.

It was an amazing experience. Doing theatre with strangers, connecting through this and dance as well, was powerful.

Apart from exploring the subject of migration and social inclusion through theatre and art, we also got to know ourselves better. We got out of our comfort zones and explored and experimented with our bodies and emotions. This can also be powerful and also empowering.

I loved getting to know, from our morning conversations, about other countries’ migration issues and social, political and economic situations and what they do about it.

In general, I learnt a lot about myself. I took a lot of initiative and got out of my comfort zone. I was less and less afraid and anxious as a person. I learnt how to express my ideas and opinions better AND in English. It was great practice for my English. I also learnt how to be more independent and confident. And a very touching thing for me, I learnt how to find myself again through dance and theatre.

I met SO many new people from different countries, with different experiences and ideas. It was refreshing. I felt that I belonged. It was amazingly weird to feel so safe and comfortable with people you just met and knew only for 5 days.

On top of everything, like a cherry on top, we got to see Palermo all together. We were so lucky to have the Italian team guide us and explain to us a lot of things. We also discovered new places together in the city and it was quite beautiful to do that.

Overall it was a great first experience. Inter Αlia, also, was so helpful and always there for questions and support.

The only thing that I would like is for the program to be a little longer cause we were doing everything in a hurry and couldn’t enjoy it to the fullest or even do more, e.g. in our morning discussions. Apart from that, I’m looking forward to more similar experiences and I’m grateful for this one.

The Aeneas program was creative and enjoyable.

The aim was to communicate between the new members of the European Union to create a theatrical performance based on the myth of Aeneas, which, however, refers to a very contemporary issue of refugees, immigration, and integration.

It was interesting how the young people of each European country dealt with the issue of immigration and asylum differently depending on the country and the social/political environment they came from. Some people approached the issue financially, some emotionally and some politically. Through our discussions, we got to know the situation that prevails in every European country for refugees and immigrants, the opinion of the citizens, and the treatment they have towards these people. Then we received some kinesiology seminars that helped us to express our feelings better through the movements. During the program, we gradually created our theatrical performance, spontaneously, through sessions of improvisation. The addition of even more dance/kinesiology gave us the main means to express ourselves without words.

We dedicated our mornings to discussion and exchange of views on social means needed for acceptance and coexistence, which helped us to connect more as a group.

In the program, we ate in a restaurant in a beautiful environment with tasty food.

Palermo was beautiful providing many activities that a visitor can do.

Individual free time was little compared to other European programs but personally, it was preferable as we had very few days to connect and communicate with so few people and through exercises and improvisation this was done much faster and more successfully.

It was an unforgettable experience in a well-designed program with a variety of things to give both to those who are involved in theatre and those who are not.

This project was about social exclusion and exclusion in general and how to fight it through theatrical practices. That is to say how to achieve universal and profound inclusion. That goal was further upheld by the programme itself since it was intercultural. In other words, people from different countries and with different cultures and values had to interact for the project to be successful or at least functional. That can be a very hard task especially if it needs to be accomplished by either opinionated or narrow-minded people. However, in this specific case, I believe that we truly overcame our differences, hesitations or even resentment and we came one step closer to genuinely accepting one another and promoting meaningful inclusion.

I tried to overcome my frustration about certain narrow-minded and biased viewpoints I came across and I think that eventually, I managed it. I believe that happened because I realized that behind the person who speaks their mind there is a whole plexus of experiences, internalized stereotypes or prejudice and deep-rooted assumptions deriving from the ruling ideology. Thus, at some point, I attempted to approach those ideas from a different perspective and with a different tone and the result was pretty rewarding. People were more willing to listen, as was I, they wanted to communicate their thoughts and be heard and eventually they were ready to unlearn and deconstruct the problematic and exclusionary parts of their ideology, which more or less were rooted in the lack of awareness of their privilege.

Therefore, I learnt how not to judge people very harshly until I truly hear what they have to say at least. I also learnt that sometimes it may take time for an ideological gap to be bridged, especially if it is a big one, however, it is possible and it just requires the right attitude and the right tone. Moreover, I realized (this might seem a bit cliché, but it is what happened ) that everyone has a bright aspect of their personality that they can share and that you can learn really meaningful and important things from everyone. So it is not only about what you can give, but it is also about what you can receive if you look at things from the right perspective. At some point, everyone in the project had a strong sense of unity even the people who did not see eye to eye in the beginning.

As a result, we had a very nice and cordial vibe between us that helped us evolve our relationship with one another. In our free time we had so much fun partying in the streets or dancing and playing drinking games at the hostel or going to the beach while it was cloudy and windy and then going swimming in our underwear (actually only I did that). We laughed a lot and we opened up about many things. We celebrated our birthday of Antonio and got soaking wet on our way to the restaurant because it rained cats and dogs. Another fundamental part of the project was my friend, Nafsika and me making fun of our other “friend”, Sofia who is part of a drama club we (Nafsika and me) find a bit pretentious. Fortunately, Sofia also laughed even though we were serious (Noo, Sofia, I am kidding).

Luckily, I got to know many participants well and hang out with them. The most affecting thing was that everyone was so special and had many different things to give you if you let them. In the end, we all formed a really strong bond, so much that some of us cried when it was time to say goodbye. Nevertheless, I cherish the good, the fun, the touching and the enlightening moments we spent together. You are all amazing and I really miss you.

In my room right now, I’m closing my eyes to notice the first memories that come to my mind.

The sound of Italian-English. Our directions towards the final performance, from day one shaping, along with us, the story we want to tell – the story our bodies wanted to tell. Before the exchange, I didn’t know I could dance. Listening to a director and a choreographer, trying their best, we “unlocked” our bodies, to share messages, to share stories.

The moments just before our performance. How backstage was totally visible by the attendees, how they watched us take photos, practice moves, dance, cheer each other up. How they might have felt part of us too.

How when I close my eyes, I can still relive conversations, still feel the ground I touched during improvisations, still taste the wine – the many different wines – I had, still look at some people’s eyes even like we are face to face.

How I can still listen to that “See you later”. And then whisper it. I’m sure you can listen to it too.