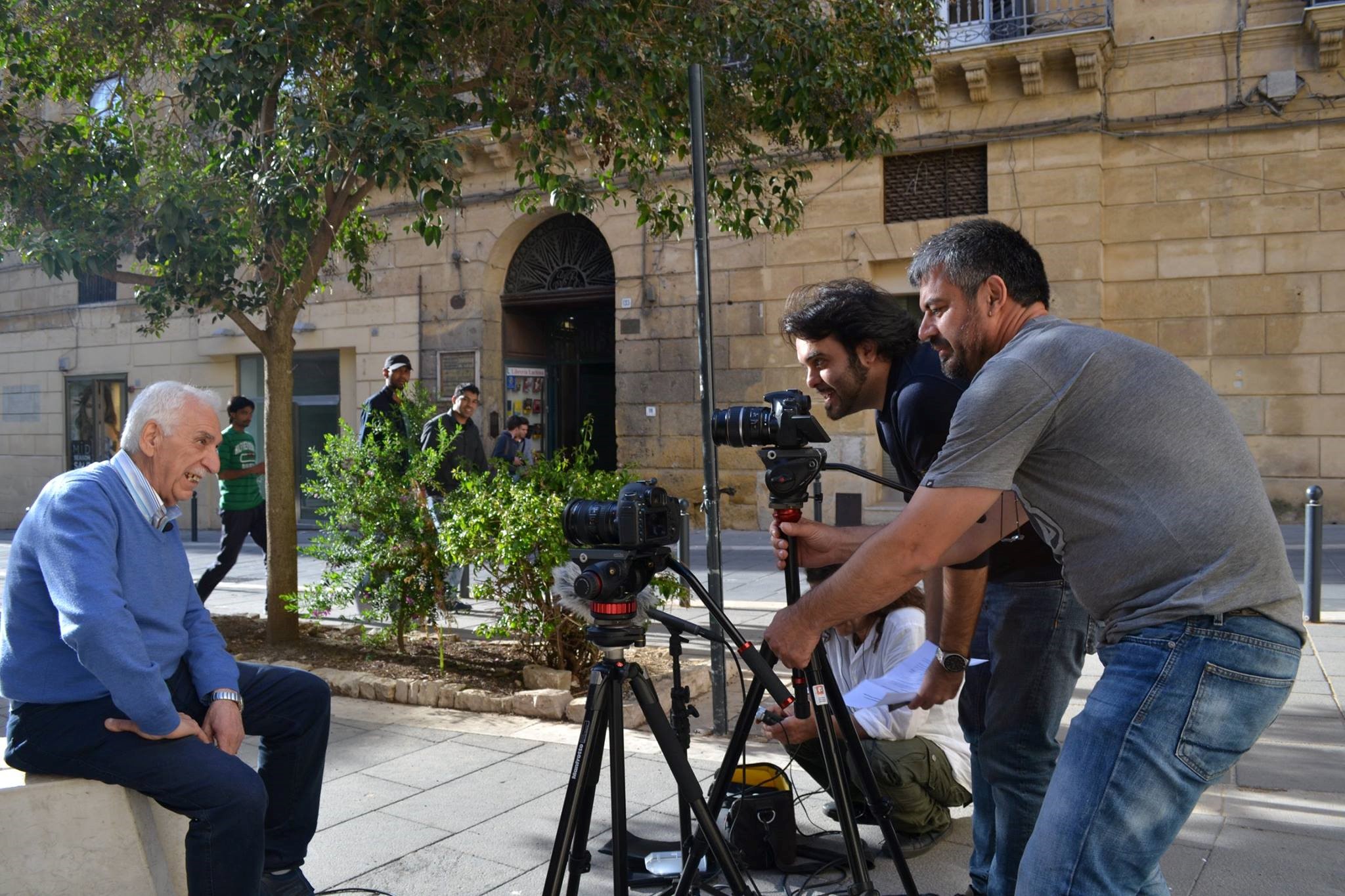 31 March – 2 April: Filming at the municipality Georgios Karaiskakis in Greece

The filming of the documentary for the “Ask the Locals!” project commenced from Greece, more specifically the municipality Georgios Karaiskakis in the Western part of the country on March 31st. Selected respondents who were identified and “recruited” during field research in the region shared stories, perceptions, concerns and hopes about their community with Inter Alia’s crew. Has the allocation of EU funding throughout the past 4 decades been effective? Are there stories to be told, indicative of false processes and understanding of sustainable EU resource allocation? Has the crisis brought about change in structures, institutions, mentalities and behaviors? How can citizens contribute to improving allocation of funds in their communities? Are there advantages and opportunities for small communities that can be used for promoting cohesion with the rest of the country and the EU? What does the future of the village, the country and Europe look like for citizens of rural and remote villages?

Such responses fulfilled a dual objective: on the one hand, to gather new information, opinions and stories derived by citizens who rarely get a saying about highly political processes such as distribution of resources. On the other hand, to get a grasp of the level of understanding of citizens over highly complex issues such as corruption and allocation of EU resources in remote areas where the level of education is, at best, moderate and state provided goods in short supply. It appears that while their involvement and benefit from the alleged misallocation of funds is minimal, if not non-existent, its results in the perceptions and feelings of citizens that come from it about the civil society, their region and the country is real and severe. Still, civic engagement and involvement in policy-making in smaller communities is easier to achieve and be more effective in comparison to larger communities and urban centers.

Shooting in the municipality of Georgios Karaiskakis, the smallest in Greece and one of the poorest in the Eurozone, proved that size does not matter and that wealth is relative notion. Our warmest thanks to Dimitris & Maria, Vangelis, Christos, Kostas, Lampros and Periklis,  who opened up their houses, businesses and hearts to share their thoughts, hopes and concerns for the future of their communities but also to the whole municipality that has supported our venture from the onset.

Public funds use and abuse have been studied through a variety of quantitative and qualitative methods and investigative journalists have filmed a lot of cases, including with hidden camera. “Ask the locals”, or as its partners and participants call it “ALO!” project, takes a different approach to the subject.

Τhrough ethnographic observations, face-to-face interviews and group discussions the ALO! team prepared for the filming of citizens’ perceptions and attitudes towards the use of EU funds in their small villages/towns. The Center for the Study of Democracy, Inter Alia’s partner for Bulgaria, chose the town of Pirdop and two villages – Chavdar and Tsurkvishte (Churchville) located approximately 70 eastwards from Sofia in between two mountains.

The team was formed by Maggy, a sociologist, Dimitar, political scientist and former UN Youth Delegate of Bulgaria, and Chris, also a political scientist, all of whom are newly graduated from universities in Bulgaria and the United Kingdom. The team did 48 interviews in March and recruited over a dozen volunteers of all ages to take part in the film. The actual shooting took place on April 7th and 8th in various places – a church, playground, a cafeteria of the pensioners’ club, restaurant, sports club and a trail in the woods. We are not going to reveal all that you are going to see, however you can expect to hear from people from Chavdar Municipality, young people from the area of Pirdop, as well as some very special appearances from the extremely friendly ladies from Chavdar pensioners’ club. All of them were excited to contribute and share their stories and impressions from the use of EU funds and the level of development of their region. 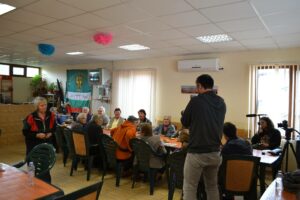 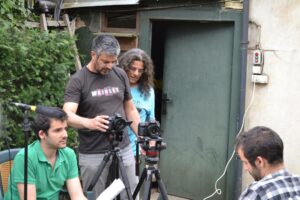 You will be surprised that within a perimeter of less than 10 km one can see the differences of engagement and performance and citizens’ appreciation when the mayor fulfills his duties. The team conveyed the message that the ALO! project will seek not only to document the current state of things, but also to facilitate citizens’ engagement towards increasing efficiency of funds use (even in cases where they have already been spent).

The film making process in Krusevo for the upcoming “The Poor Cousin” documentary started with “casting” the main protagonists. Throughout this preparatory stage the working group from Youth Alliance-Krusevo identified the most relevant and captivating stories from the locals. Selected stories were closely related to the main aim of the project, that is, to utilize small community structure and dynamics for enhancing accessibility and effectiveness of allocation of EU resources, thus attempting to involve citizens and stakeholders who rarely have a chance to contribute in the process of building a European narrative. When the protagonists were finalized and noteworthy stories were found we entered the phase of filming. The production team from Athens arrived in Krusevo on the 11th of April. The YAK’s working group along with the production team of the documentary filmed 10 local citizens who were willing to share their stories, perspectives and experiences regarding the local storyline of funds misuse and the level of corruption in the particular region. There was an assortment of individuals who stood in front of the camera. This is demonstrated by diverse profile regarding gender, age, professions, cultural backgrounds, religion, social status and political views.

Even though the team faced few unpredictable circumstances regarding the setting and the timetable during the filming, in the end, every one of the foreseen goals was achieved due to the good management, cooperation and, when needed, improvisation of the production team. The coexistence and collaboration between the filming crew and the working group seemed to be very contributive for finalizing this stage from the project.

The further activities including the actual process of movie making, promotion of the film and raising awareness throughout this documentary film are ongoing and the working group from Krusevo will continue working and supporting each future phase of the “Ask the Locals!” project.

Bujanovac is a lesson and a proof why the process of European integration should be precipitated. The backwardness of the region, not only in comparison to the EU but also to the rest of Serbia, highlights that people with low level of education and poor leaving conditions cannot be accused of being implied in highly sophisticated notions such as corruption and fund-abuse. The current EU policy excluding Western Balkan countries because of issues such as corruption somehow resembles a patient asking a doctor why she is ill and him answering because of the illness. The answers provided by the EU are wrong because they perpetuate divisions and inequality. Low living standards and lack of quality education is a notion identical to corruption – as it is understood and applied by the EU. This is a vicious circle that needs to be cut. EU integration is the only mutually beneficial way to go. 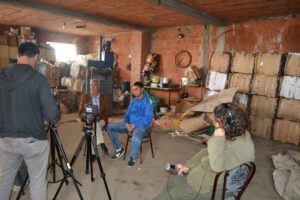 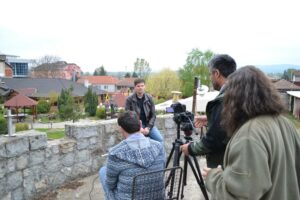 The shooting of the sequences for the documentary filmed in the context of the “Ask the local” project took place in the Bacau Municipality and the commune of Horgești, in the period 25th – 28th of April 2016. 8 persons from different social context, education and different background answered to our questions: from activists in the field of ecology, to retired persons and employees from NGO’s were interviewed. Even though the selected interviewees are living in the same town and region, the way they perceive the corruption phenomena is different. We heard many stories about “fairies” who hijacks European funds to make fictitious schools, build roads that were broken a few months later or how corruption stood in the way of development of the rural communities over the past 20 years. With this occasion we want to send our thanks to Nikki, Paul, Florin, Cristian, Elena, Petrică, Sorin and Constantin for the fact that they accepted our invitation of sharing their stories about the mismanagement of public funds as well as their perception of the future and the potentials of their community. 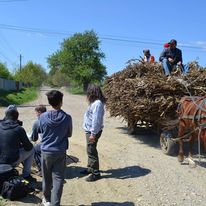 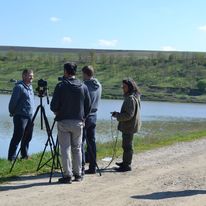 Interviewees for the “The Poor Relative” documentary were identified through preliminary field research carried out by PRISM in the town of Caltanissetta based on participants’ interest in the topic and their involvement in the local community. The resulting group of respondents, however, was particularly heterogeneous in terms of their professional and educational backgrounds: from young people involved in local recreation activities to active, colorful pensioners and from professionals active in the promotion of the region to the host of a radio show at a local broadcaster. 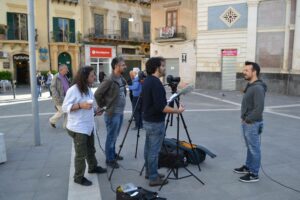 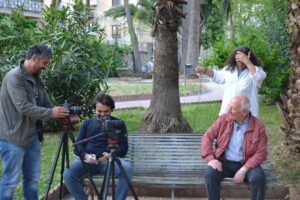 Respondents’ interest in the main theme is shown both by the style and content of their responses. They showed a fairly clear perception of the phenomenon of the use of European funds in the territory, although in many cases, they refrained from making specific references to events or special cases. However, their perception of missed opportunities that the local use of the funds represents, is very clear and well perceived by all respondents.

Another important aspect which resulted from many interviews, is that each one of them, having a strong knowledge about the town and its citizens, had clear ideas on how these funds may be well spent. Many ideas, many tips (to forward to those who manages these funds) have come out during interviews and for this reasons the results of the interviews and the level of involvement of respondents, bodes well for a product in line with the project’s expectations and aims.

Moreover, a good promotion of the project, at local level, has been assured by the radio interview made at local radio station (Radio CL1) to Nikos Papakostas (Inter Alia) and Alessandro Melillo (PRISM), giving resonance to the project and to the activities carried out at local and European level.