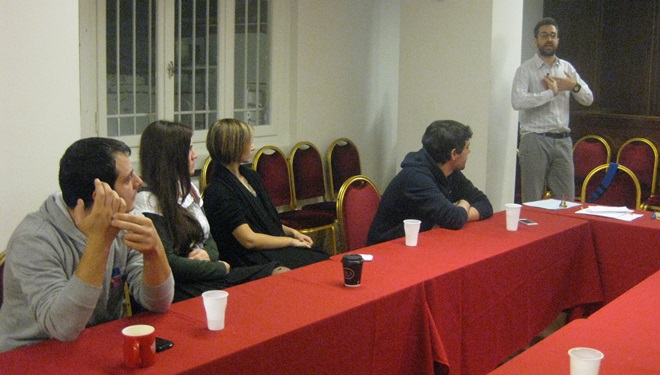 In the beginning, Inter Alia member Nikos Pasamitros introduced the participants in the concept of conflict resolving / problem-solving.

Then, the participants were divided in two teams and were given the session material. The two teams were supposed to address the issue of youth unemployment in a fictional country with severe economic problems. Team A role-played the decision-makers (Youth Employment team of the Department for Employment) and Team B the employers (Special Group for Youth Employment and Employability of the Enterprises & Industries Association).

In the 1st phase, the parties analysed the issue from their point of view. The decision-makers stressed the necessity for austerity policies, the great cost in the unemployment fund, the pressure of the migration issue and the rising issues of solvency. In addition, team A expressed its concerns for the high public frustration and the fragile social balance. The employers pointed out the worrying sales’ drop, the problem of staff ageing, the efficiency fall, the staff reduction the rising taxation cost and the social distrust.

In the final phase, the parties proposed solutions and action plans to confront the issue. The decision-makers suggested the reduction of profitability in a viable manner, the reduction of the value added tax, the support of technology enterprises with the precondition of employing youths, the introduction of a mediatory credit system for the promotion of robust entrepreneurship, incentives for new enterprises through loans and tax reliefs and investing in universities and innovative programmes. The employers proposed subsidies for employing youths, investing in both public and private universities, limiting migration, deregulating entrepreneurship, reducing bureaucracy, the promotion of flexible labour, providing favourable loans for new enterprises, extroversion policies for old and new foreign enterprises at home and vice versa and finally the spread of the use of social media for entrepreneurial purposes.

After the closing comments, the participants expressed their overall satisfaction with the simulation and Inter Alia got valuable feedback for its similar future projects.