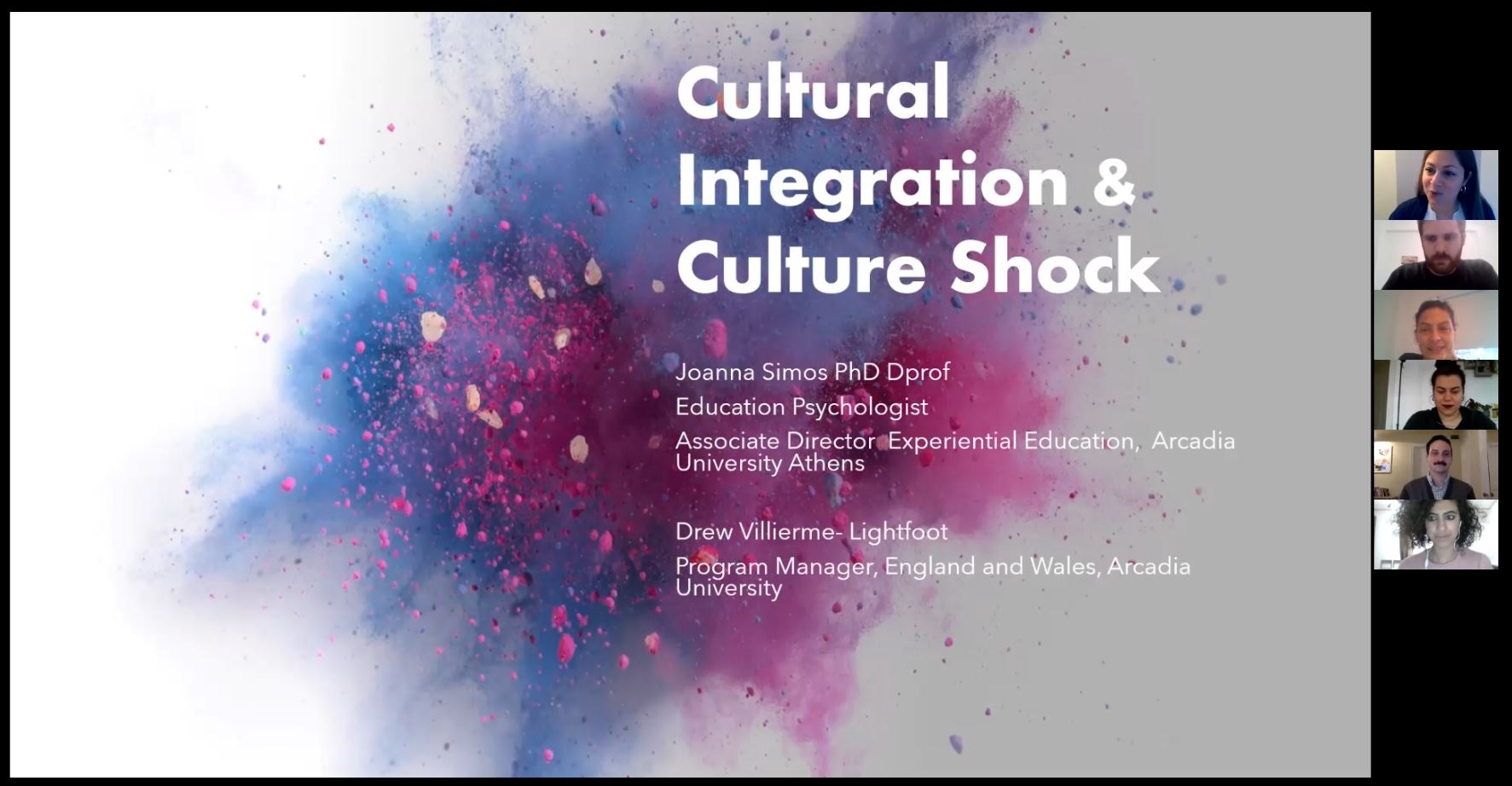 At an online meeting (28 January 2021) we approached what “culture shock” can be for each of us. We invited colleagues who have experienced the change of cultural environment in the context of their work, studies, and practice, going abroad and returning home.

Changing country, the place we live and the place we work doesn’t come without surprises. It presents us with learning opportunities through new situations and environments. It brings us in contact with new emotions, since we create relationships afresh, within new value frames and in a new culture. We experience a “shock” due to the significant change of cultural context, which mobilizes thought and emotion.

Returning to a place we consider familiar, such as our home, our neighbourhood, or our old job, may be somewhat different than we would think. Having lived elsewhere, with a new point of view, we gaze upon the familiar in an unprecedented way. A “reverse shock” can be experienced as a re-examination of what we took for granted, as consistent and fixed.

With questions such as how each person’s identity is reconstructed and changed in the new cultural context, how they experience their return, what they have learned, we discussed the creation and cultivation of intercultural skills and their usefulness further than the mobility experience.

Our guests have experienced culture shock in person (volunteers from abroad, living, working, studying) and have been called to deal with people under the culture shock professionally – assisting others in the ways to manage.

Joanna took us through the stages of cultural adjustment in voluntary travel and talked about the theoretical framework of intercultural education and travelling abroad. Then she went on to touch upon the definition of culture shock and its implications. How does culture shock look like? How does it feel?

Folks embark on cross-cultural experiences for different reasons and sometimes they choose to do so out of curiosity and excitement. And other times they don’t have that choice. And they are forced by a certain circumstance to livein a new culture or country.

Drew’s stories highlighted the difference between expectations and the reality of the not yet known, how is life as an outsider, the process of finding a community and one’s place in it, and what it means to become a cultural ambassador.

Joanna went on to provide us with some tips on how to address culture shock.

Create a routine. Give yourself things to get used to. […] Use the resources that are available to you.

She also discussed the aspect and role of a receiving organisation. Offering support and resources as an organisation to newcomers is pivotal to foster a successful intercultural environment. Support to vulnerable groups needs to be prioritised, the staff needs to be prepared and aware, to establish relationships and offer support with care, not criticism.

There’s a light at the end of the tunnel. Culture shock is part of the process of cultural integration. It’s a difficult but rich experience.

Joanna concluded by sharing a quote from “Beyond the Sky and the Earth: A Journey into Bhutan” by Jamie Zeppa, that showcases the interplay between physical travel and internal development.

Listening to Joanna and Drew, I was thinking, where were you 8 years ago when I was in a shock and I didn’t know what was happening to me and everyone was having fun and I was an Erasmus student and I was suffering?

Now, years later, she describes this experience as generally useful. Fortunately, young people nowadays are in a better position to prepare for such a transition.

Stella’s story starts with her arrival in Granada, Spain. All alone, she had to travel to a whole different part of an unknown city, to reach her place of accommodation. This miscommunication led her to take the bus in search of the right address. She described a lively picture of an anxious street vendor who left her stand next to the bus stop to take her to the right place.

Summing up, Stella stated her opinion on the best outcome of culture shock, which she believes has social implications:

We can realise a lot of things about ourselves. Not only in the context of everyday life, but also in a political and an activist context.

The round of speeches was concluded by Ms. Emna Miled, Junior Project Manager at CESIE, Italy, and former volunteer at Inter Alia, in the framework of the European Voluntary Service (EVS).

Emna shared her experience of migrating to Italy at an early age, and years later, of travelling to volunteer in Greece.

I will tell you about two kinds of culture shock that I had during my life. One was during my childhood and one during the EVS that I did with Inter Alia, two years ago. I am glad that Joanna shared the quote from the book. It was very interesting because I really found myself in that passage.

Her 1st culture shock was when, as a child, she was forced to move from Northern Africa to Italy.

…migration was very difficult for me. I was forced to leave my friends, my comfort zone, and to learn to live in a different country. New habits, new language, new ways to communicate with others and when I found a routine, I was forced to move back to my country of origin because my parents thought to do so.

In the meantime, she has forgotten how to speak Arabic. After two more years though, her family moved back to Italy.

The first 10 years of my life were very challenging in terms of culture shock.

She saw the 2nd time in Italy as more difficult. She had to relearn Italian and to establish new relationships. She described her second culture shock in Athens as a very enjoyable experience.

“In 2018 I did the EVS in Athens. I prepared myself in advance. I studied the new country, how was the life in the city, what I wanted to try. I think the six months in Athens was all a phase of honeymoon.”

Her early experiences had prepared her emotionally.

I think as an adult who can choose to travel and can be prepared for a new experience, a new country, now, it is easy for me. I move with this awareness. The first times though, forced to leave security, my comfort zone, that was a different experience.

After the guests’ input, there was time for personal reflection, and some additional questions and sharing. Boyka Boneva, facilitating the meeting, expressed an overarching question.

Where are we local? When does one start to feel local?

As a foreigner in Greece, as she described herself, having more than 20 years in Greece, she feels more of a stranger in her hometown in Bulgaria than in Athens. This opinion echoed the experiences of the speakers as they went on to confirm. “Am I Tunisian or Italian? Maybe half and half?”, Emna jokingly but affirmatively added.

As the meeting was nearing its end, the speakers had a round to discuss what they are taking away. They agreed that we need to discuss culture shock and experiences of intercultural environments. Both on a personal and organisational level, it is important to do what can be done, as a measure against exclusion and inequality. Finding more precise terms to express such rich experiences, other than the terrifying notion of “shock” may be a step towards supporting positive views on these issues.

With participants from Vietnam to the USA, this meeting took place in the framework of the “Building Intercultural Competences” project, co-financed by the Erasmus+ program of the European Union.