| A New Narrative for EU Elections and Beyond: how to Engage Youth

Accepting the invitation of the Romanian Center for European Policies CRPE, we are glad to share with you our participation at “The Future of Europe” meeting, on the 23rd of November, 2019, at the Bucharest University of Economic Studies.

The focus of the meeting was the Democratic Challenges and the Roles of civic engagement. We had the opportunity to meet with colleagues, civic workers and activists from different initiatives. We had a productive dialogue and sharing of practices regarding the common challenges we are facing and the particularities of each national frame. 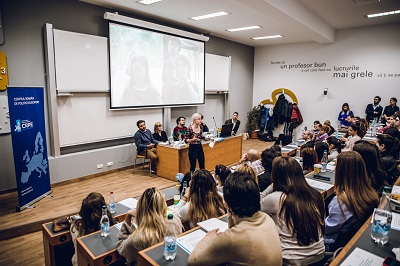 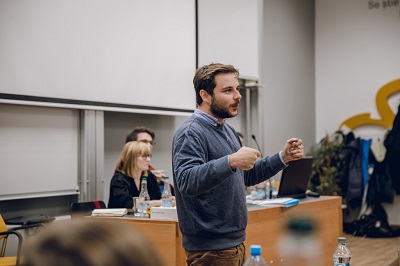 The meeting was comprised of two panels. The first was dedicated to practices and initiatives dealing with the democratic challenges all over Europe. Those intervening were the following:•Bart Scheffers, Open Society Foundation•Cristian Doroftei, OccupyGuguță, Republic of Moldova•Marius Schlageter and Katja Sinko, The European Moment, Germany•Veronika Víchová, European Values Think-Tank, Czech Republic•Alexandros Vakoulas, Inter Alia, Greece 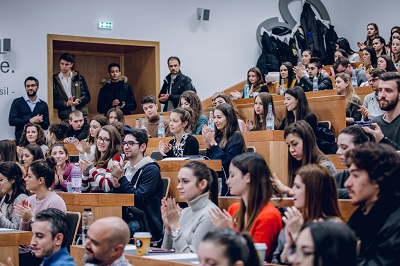 Our intervention shared episodes of civic unrest and self-organisation during the last decade, since 2008, and outlined the practices the civic society has developed.

The second panel focused on the Romanian pro-European unrest. The speakers shared their experience with organizing with others to express their concerns publicly and also their analysis of what happened and how it affected Romania. The participants were the following:•Cătălin Teniţă, Geeks for Democracy•Mihai Poliţeanu, Inițiativa România (TBC)•Mihai N. Tudorică, Asociația pentru Relații Comunitare

We would like to thank all those in attendance for their valuable contribution and the CRPE for their invitation.

For more information on the participation of Inter Alia at “The Future of Europe” meeting, contact Alexandros Vakoulas at vakoulas@interaliaproject.com