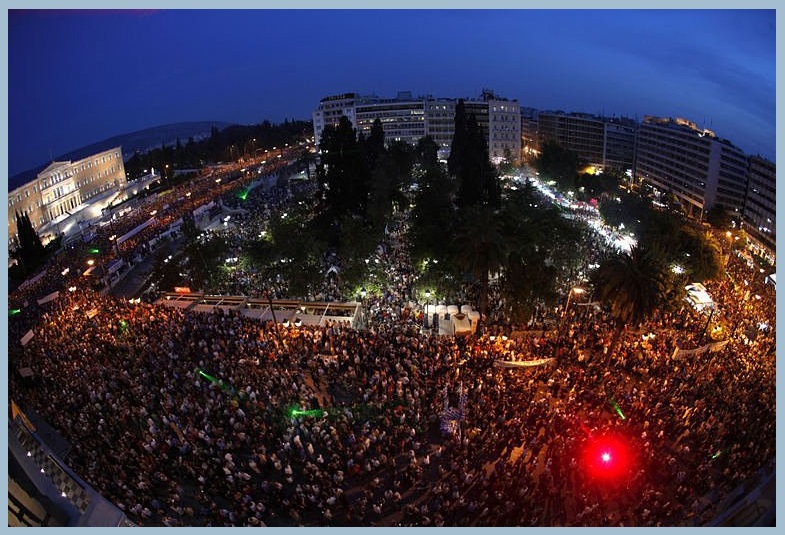 By Nikos Papakostas and Georgina Papada

Two papers on the Greek protest movements that rocked the country in 2011 and 2012: Georgina Papada’s “The Greek Austerity Protests & their Representation in the British Press” and Nikos Papakostas’ “Towards a New Culture of Social Protest? Lessons Learnt by the Case of Indignant Greeks Two Years after the Dissolution of the Movement”.

Inter Alia marks the passing of two years since the “indignant” movement’s dissolution in Greece with two research papers. Georgina Papada, Inter Alia’s social media manager, analyzes British media coverage and its impact on the international image of the movement.  Nikos Papakostas, head of Inter Alia Research & Analysis assesses the long-term impact of the movement on civil society mobilization and underscores discrepancies between different branches of the recent movements.

Between October 2011 and February 2012, protest events in Greece peaked, with thousands of Greek citizens taken to the streets to join the marches against the austerity measures imposed by the government. These protests have been stigmatised by vandalisms and the eruption of violence during confrontations between protesters and the riot police, while pictures of such events travelled worldwide. The primary goal of this paper is to present the image of the Greek demonstrations that took place primarily in Athens from October to February, as captured by the British press.

This analysis takes as a case study the articles of two newspapers of different styles: the Guardian as a broadsheet paper and the Daily Mail as a tabloid. The literature review chapter covers the academic research conducted on protests throughout the years, also including the media coverage of protests, a brief background section on the history of Greek movements as well as the concept of violence existing in demonstrations. Furthermore, the conceptual framework introduces the tools used during this project, building the bridge to the section of methodology, where Fairclough’s work on critical discourse analysis is explained along with the difficulties and challenges that were encountered during this research. In the empirical chapter, critical discourse analysis is applied to the articles of the Guardian and the Daily Mail, which are analysed in terms of the use of language, the contradictory angles and the tone of the journalists in order to identify the meanings constructed, the differences between the representations of the events as well as the possible implications for the reading audience.

Nikos Papakostas “Towards a New Culture of Social Protest? Lessons Learnt by the Case of Indignant Greeks Two Years after the Dissolution of the Movement”

Starting from January 2011 at Tahrir square, Egypt, a new mode of public protest appeared and affected the global riot culture. “Indignant” Egyptians, gathered after an online call, reacting to (former) President Mubarak’s undemocratic rule and their constantly decreasing income. Since then, a growing number of movements throughout the globe have utilized the same media for indicting governments’ policies over the economic crisis. The Western branch of the “Indignation” movement, starting from Madrid gradually expanded throughout Europe as the economic crisis unfolded and also took over the US through its “Occupy” version. Lately, similar events occurred at large scale and after diverse pretexts in Brazil and Turkey.
These movements that have also been organized via social networks on the internet have played an important role in awakening social awareness among civil societies and especially among the youth. Conceptually, they are unyieldingly peaceful and apolitical. However, it has been argued that the particular mode of protest, in the context of functioning liberal democracy, cannot survive once pressure rises, given people’s lack of motivation for fighting over ill-defined goals and the power of institutional pressure groups with competitive agendas. The hypothesis that will be defended is that the particular protests despite their inglorious dissolution in July 2011, have played a significant role at increasing awareness among civil societies that may improve the movements’ career in the medium and long term.

Use the following to cite these articles: