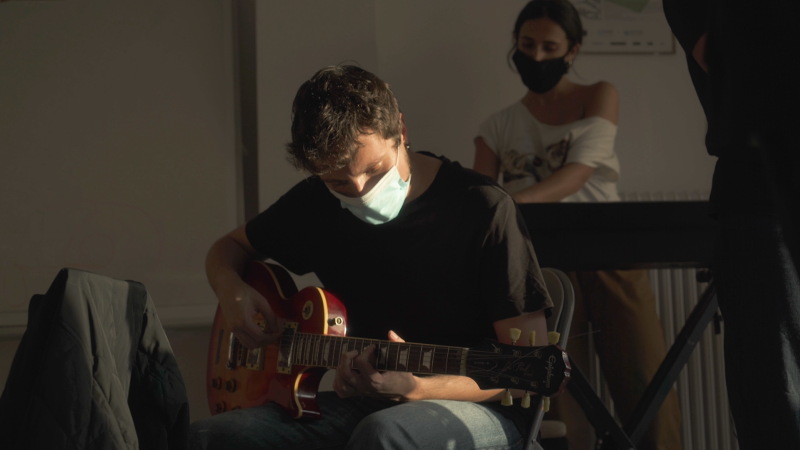 We live in a city full of loud and harsh sounds. So, we decided to add more tones and create our own musical sounds.

Thus, we managed to make our environment richer in sounds, in beautiful sound stimuli, more receptive to expression and inspiration. In order to communicate with each other through sounds and musical instruments, we first had to discover our inner rhythm and the intricate sounds we didn’t imagine living hidden somewhere in our minds. So, we created some music we previously didn’t know existed.

The workshop was attended by Boyka, organizer of the workshop, Konstantinos Christodoulou, as coordinator of the musical improvisations, Thomas, Vivi, Marianthi, Giota, as well as little Hector.

There were various percussion instruments (dum dum, congas, tubercle), an electric piano with various sounds in addition to those of the piano (vibraphone, hammond), an electric guitar, a microphone, a melodica, and a metallophone.

We tried, each choosing one musical instrument at a time, to produce a sound effect together, without rehearsal, based on some spontaneous ideas of ​​either the coordinator of this small orchestra or one of the other participants.

We started by following a pattern on the electric guitar, which remained the same with small variations throughout the improvisation, and ending after about fifteen minutes in a fade-out closure, by lowering the volume and diluting the sound density.

We filled the space with notes and musical sounds that sought to find their own balance, a form, a rhythm, a coordination between them resulting in a knitting game of spontaneous discovery of music.

During the next test someone else played an opening pattern on the percussion and the rest of us played on it, this time adding the element of volume fluctuations, according to the sound instructions of the percussionist, and closing again with a similar fade – out.

In the next musical attempt, we chose different musical instruments again, and while the original idea was to produce a more abstract and “spread-out” result, with more scattered, sparse, irregular sounds, which would inspire each other, we finally ended up following again a constant rhythmic pattern formed mainly by the percussion. This improvisation began with sounds from the future and ended with the successive stopping of the instruments, until a musical instrument was left alone and stopped.

This was followed by a small discussion about the feeling we had formed from this musical collaboration up to that point, and about how we could continue.

Then, Thomas directed the next musical attempt, determining which musical instrument would decrease in volume, which would intensify or stop playing for a while, the overall volume fluctuations, the slowing down or acceleration of the rhythm and how and when we would stop. to play.

Marianthi then improvised on the microphone with her voice based on the song by Ennio Morricone and Joan Baez: ‘Here’s to you’, and we accompanied her on percussion. This was followed by a second performance of the piece accompanied by organ – from the sounds of the piano – and percussion, and interpretation and improvisation by Marianthi.

Then we took a break on the large terrace of the space, while the sun was setting, and the workshop ended with free improvisation with musical instruments (percussion, piano, electric guitar, metallophone), and this time conductor little Hector, who he told us when to stop and when to continue playing, dancing in between and giving the rhythm.

We felt the music appealing, we listened to the various sounds coming out of us and saw how they could serve as inspiration for creating music.

We met new musical instruments, their sound capabilities, and how each of them can be a means of expressing moods and emotions in a music workshop that addresses everyone, regardless of musical knowledge, and aims at the empirical discovery of communication through sounds and of music.

All the improvisations lasted about fifteen to twenty minutes each and were based on a rhythm.

Thanks to Inter Alia, the Tribal Studio where we rented the percussion, and Phil for his help.

The action took place in the framework of the project Inter Arts Youth Communities for Social Inclusion, Erasmus +.