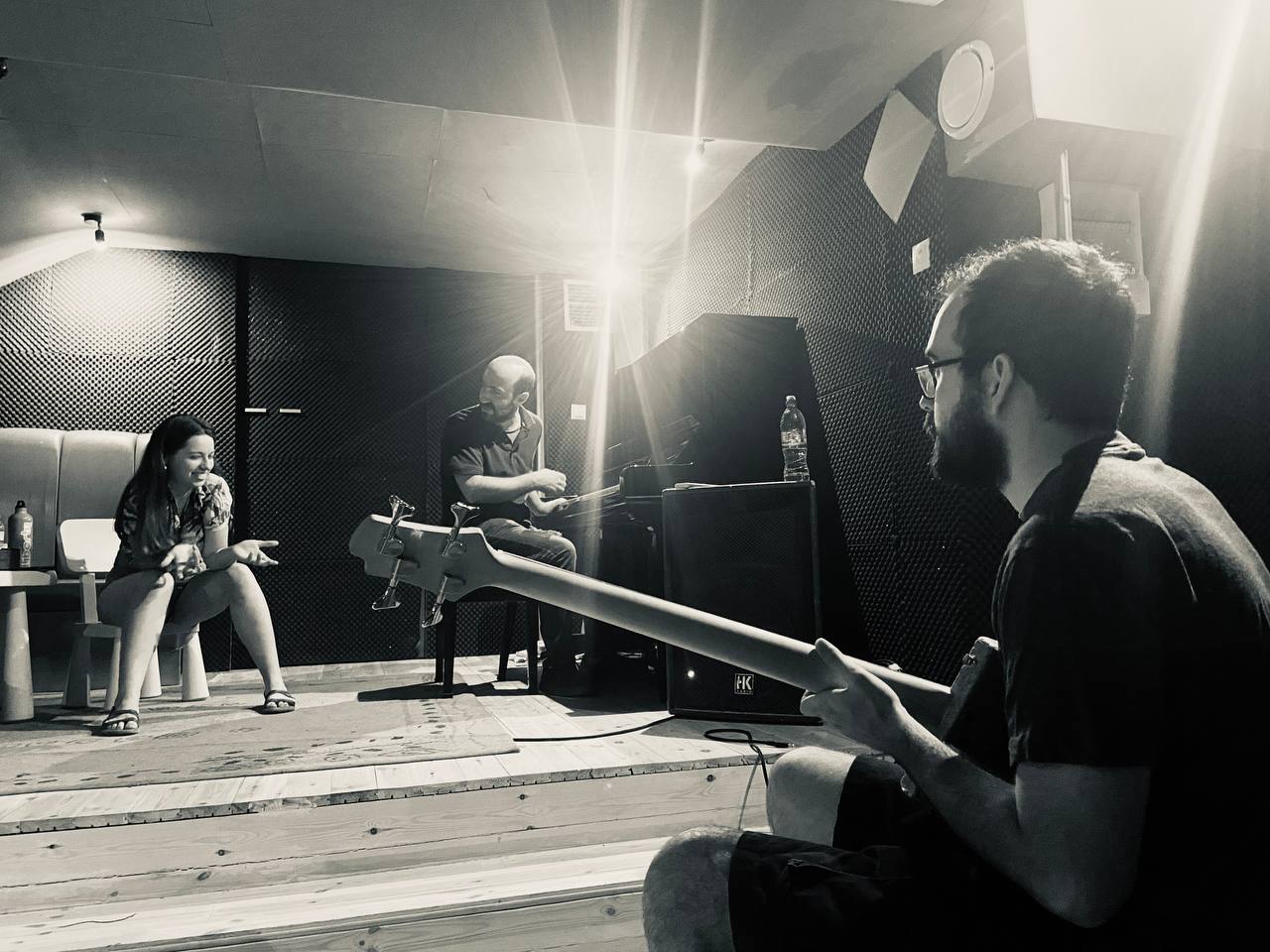 Reflection on the music residency & performance, by Constantinos Christodoulou

With a view to forming a band and getting a gig at Exarchia square on July 9, a group of musicians, coming from different parts of the world, gathered at the studio of ‘Musikarama’ in Neapoli – a great, lively place, friendly, hospitable, open to musicians and new friends. Our hosts there, Inaki and Joe, were very supportive and hospitable throughout the residency.

During our first meeting, we already started experimenting on some ideas, being enthusiastic about that creative process, and having a good time. Most of us hadn’t met before. In the following days more people joined the group, and so the final line-up was: Kuba from Poland, rap singer, member of the Polish band ‘Cieple Brejki’, Ana from Bulgaria, opera singer, Bene from Togo, Africa, dancer and singer, Thomas from Egypt, speciliasing in hip–hop verse, Nardin from Egypt, Thomas’ sister, who played percussions, and from Greece: Mandy, who also played percussions, Constantinos on the bass, Elias, who played the electric guitar, trumpet and flute,  Constantinos on the piano and Vasilis, breakdancer, who enriched the gig with his dance. On the day of the gig there were also some special-guest appearances by Stratos on the electric guitar, and three rap musicians who came up on stage out of the audience.

We met every afternoon for about a week at the ‘Musikarama’ studio which was fully equipped with all sorts of instruments. We all brought our musical ideas and verses and in a chilled, enthusiastic, collaborative spirit we put together our first song: ‘Missin’ the Point’. It consisted of four parts: a Polish hip-hop verse part by Kuba, a vocal composition that came from an improvisation in a Bulgarian traditional tone by Ana, an African traditional singing part by Bene, and an extended instrumental part at the end, where all of us took part in improvisation. Over the following days we came up with more ideas. Ana and Constantinos on the piano made an arrangement of a traditional Bulgarian song called ‘Nazad, nazad Kalino mome ’. We also made arrangements of two songs of ‘Cieple Brejki’, ‘Fellas’ and ‘Babciu nie jiem miesa’. Other songs were based on ideas on the bass by Constantinos, which were mostly funk and rock bass riffs, on guitar riffs by Elias, on African motifs by Bene, and on rapping verse by Thomas, as a result of improvisation and jamming sessions. In total we prepared seven songs. As two members of the group have the name ‘Constantinos’ and as a result of some jokes about it, we decided to name our band:  ‘the Constantinos Band’, and the final playlist was formed as follows: 1. Missin’ the Point, 2.Scrabble 3. Chips and Gingerbread  4. Ana’s song 5. No more Mr Nice Guy (just the two of us) 6. Grandma I don’t eat meat 7. Kumbarama 8. Missin’ the point – finale.

At some point, Dimitris came to the studio with his camera to take photos and film parts of the residency, and interview us. He also contributed to our effort with his calm and agreeable presence.

After the rehearsals, we often hung out all together and enjoyed the summer nights of Athens. We went to a gig at a park in Kypseli, we walked around Acropolis and the Herodion Theater, we sat at ‘vrachakia’ (meaning: ‘the little rocks’) where we enjoyed a great panoramic view of the city and tasted the traditional ‘souvlaki’ at a Greek tavern. We had conversations about the cultures of our countries and more, shared our thoughts, laughed, and generally got to know each other. Mandy guided us through the city, suggesting nice places where we could go, and giving us interesting information about them.

The day of the gig came, and early in the afternoon we went to ‘Musikarama’ to pick up the instruments and equipment and carry it to Exarchia square with the aid of the Musikarama van.

We were all at the square and everything was quite ready, when about half an hour before the beginning of the gig, it started to rain. The rain didn’t stop for a while, so the gig was postponed until the following day. Instead, we all went to a very nice Cretan restaurant in the center where we tasted traditional food and drink from Crete and had a great time!

So, next evening, the time of the concert had come. The weather was very nice, everything seemed favourable for our gig, and we were very excited about it. At about nine, o’ clock, after a warm, welcome introduction by Nikos from Inter Alia on the microphone,  the ‘Constantinos Band’ got on stage, and the first notes from Ana’s singing came out like an exotic, colourful nightbird gently flying above the square, introducing our first song: ‘Missin’ the point’. The square was full of people who seemed quite in the mood for music.

The gig rolled on fine. Our songs went on as planned, even better than what we expected, we had a very good time on stage, and the audience seemed to be having a nice time too. During the gig Vasilis got up two times and breakdanced, and was warmly applauded.  Towards the end, there were some guest-appearances by three hip-hop artists who rapped nicely in different languages, ‘Constantinos Band’ accompanying them, and our concert ended on a high note with a jamming session with Stratos on the electric guitar and vocals.

There’s a plan to meet again in November and play on stage in Athens, along with other corresponding residencies from other countries…

…So, hope we’ll see you then!  Thanks for everything Nikos, Boyka, Margarita, Inaki, Joe, Dimitris, Inter Alia and Musikarama!!!

For more information about the “Youth Going Live” project contact Boyka at boneva@interaliaproject.com