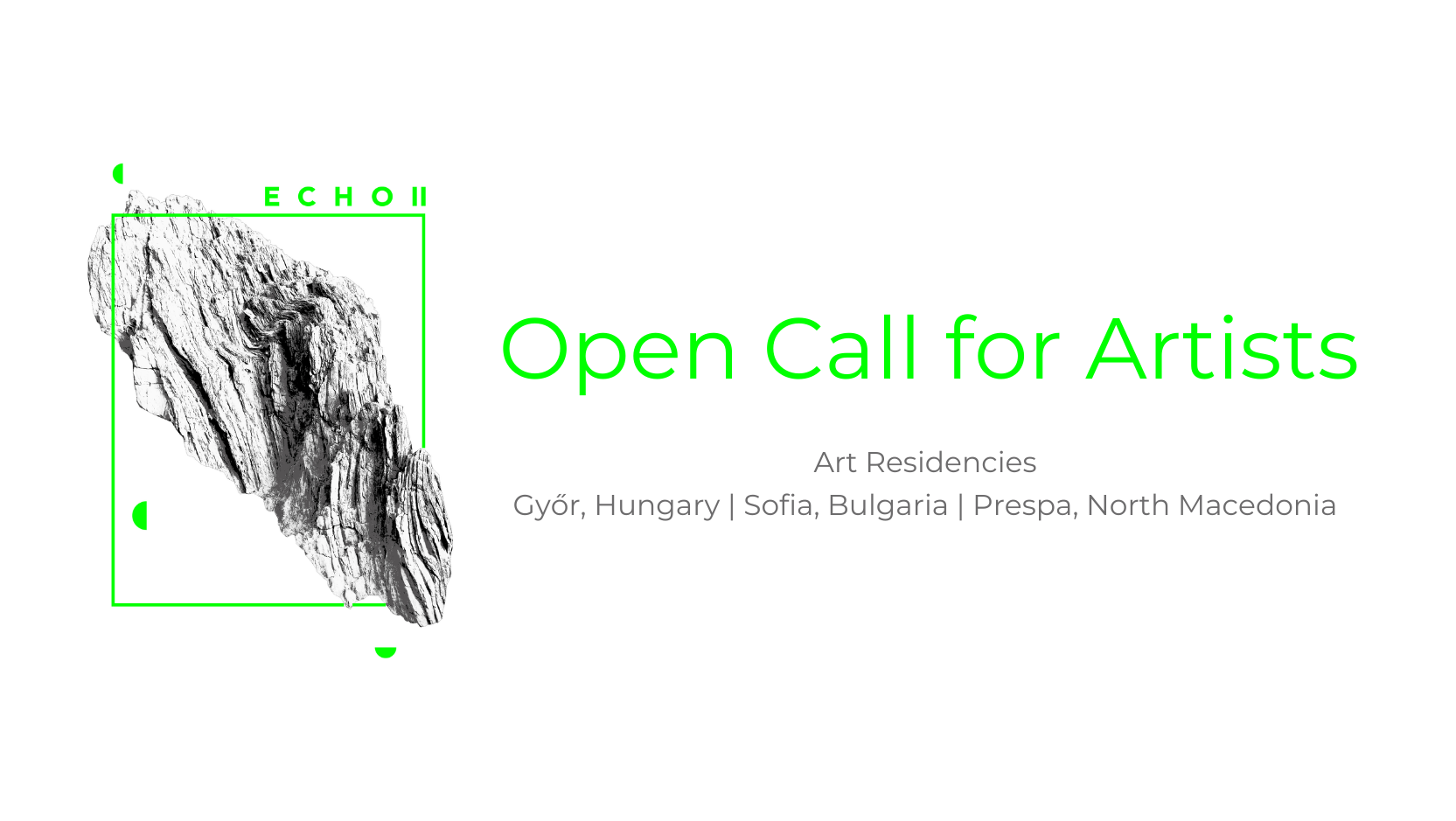 Inter Alia seeks for three (3) artists that reside in Greece and work in the fields of painting, sculpture, graphic design, fashion design, craftwork, and mural, to participate in the first three (3) art residencies of the ECHO II: Traditions in Transition project (one artist in each art residency).

The selected artist will be integrated in a four-member team of artists (coming from Greece, Bulgaria, Hungary, and North Macedonia), and, in dialogue with the local community, will create artworks inspired by the life and community of Győr distillery’s workers as a local tradition of Győr.

Győr is an industrial city: the factories operating here have defined both the society and the economy of the city for centuries. The Győr Distillery started operating in 1884 and is the only one among the many factories that have been operating in the same place since its foundation. There are families that have been working there for generations. The factories – including the Győr Distillery – are thus part of the history of many people, families and communities in Győr. In addition to its industrial character, Győr is also rich in cultural inspirations. Such as the world-famous Győr Ballet, the EFFE Award-winning Five Churches Festival, the ecclesiastical-sacral center in the city center and the Vaskakas Puppet Theater, which is one of the highest listed professional puppet theaters in Hungary, the Győr Philharmonic Orchestra which is constantly looking for new ways, Győr’s museum with the largest collection in the countryside, and form-breaking cultural venues such as the “Beton” in a former military shelter, or the Torula Art Space. But just as inspiring is the meeting of the three rivers in the Downtown or the contradiction between the Baroque downtown and the suburbs full of panel houses. The location of the art residency is the Torula Art Space, which was built in one of the factory buildings of the Győr Distillery, which has been empty for decades. In Torula, 7 artists have studios. Next to them, Torula is a venue for temporary exhibitions, creative camps, workshops, conferences and creative community events. Art residency is realized in this inspiring environment, through interactions with artists and communities working in Torula.

The selected artist will be integrated in a four-member team of artists (coming from Greece, Bulgaria, Hungary, and North Macedonia), and, in dialogue with the local community, will create artworks inspired by the local traditions of the city of Sofia.

Sofia encompasses archaeologically, historically and architecturally valuable personal and real estate property from different time periods. It also includes the existing intangible living heritage (folklore, cuisine, traditional self-governing Bulgarian cultural and educational associations), the heritage of minorities and immigrant communities, and the industrial heritage. The cultural heritage of Sofia is especially valuable with regards to the Bulgarian, European and world cultural heritage. With its long history replete with important events, the city has become a bridge between the different time periods on this land – from Prehistory to Antiquity and the Middle Ages; from the Renaissance to the New Age. By becoming the capital of Bulgaria, the city takes on the role of being a carrier of important cultural traditions and is proof of the development of the national and European culture during the XIX-th and XX-th century. Sofia is the leading centre of museum curation in Bulgaria. Here, one can find the most important museums and leading exhibitions. Sofia is a city which played a significant part in the history of Christianity. One of the churches, the Boyana Church, is included in the UNESCO World Heritage List.  Shopska folklore area, also called “Shopluk”, is distinguished by a number of cultural features. The majority of its population belongs to the Shopi ethnographic group and bears the general name “Shopi”. The grandmothers of Bistrita village (BISTRISKI GRANDMOTHERS) are famous all over the world for their performances of archaic folklore from Shopluka. In 2005, the Bistrita grandmothers were included in the UNESCO list of masterpieces of the intangible cultural heritage of mankind.
• Consideration of the scope of the cultural heritage, part of which is not recognized as such or is thought of as problematic such as the following: (a) the heritage of minorities and immigrant communities in Sofia; (b) the industrial heritage; (c) the heritage of socialism; and (d) the heritage of the Ottoman Empire.

The selected artist will be integrated in a four-member team of artists (coming from Greece, Bulgaria, Hungary, and North Macedonia), and, in dialogue with the local community, will create artworks inspired by the local traditions of the Lake Prespa.

The Prespa region is a historical, dynamic region that involves North Macedonia, Albania, and Greece in its folds; including forests, lakes, and villages. The region has been accepted as a separate identity since the Sixth Century when slavic tribes settled in the region. Since then the region has formed under many different influences, including: Roman, Slavic, Greek, Maceodonian, and Albanian. However, it has always found its own identity, culture, and traditions through these times in history. The region holds nature to a high respect, having two of the highest tectonic lakes in the Balkans, those bodies of water are very important to the people of the Prespa region. They have beautiful forests, swift rivers, beaches, and quaint villages nestled in their mountains and valleys. Religion is also a large influence in the region. It is the home of the Church of Saint George, one of the oldest churches in the Balkan region. Built in the 12th century, and used even today – it is a building of massive historic importance, holding frescos from the Macedonian Renaissance, and many important and famous artworks from the region. There are many other historic and traditional churches and mosques in the area. Another important historical and useful item is the ancient Via Egnatia which weaves its way through the Prespa region. An ancient road built by the Romans in the 2nd century BC. Some parts of it are even still used today – whether as walking trails, or have been converted into paved roads still used for transportation. The Prespa region has always held a history of travel and commerce, this road aiding in that process. It is a wonderful example of history turning into something used today, still maintaining its importance. These traditions in the region have been practices and the culture lived in for centuries. In this new age of technology and globalism however, these traditions are not being highlighted as they should. ECHO II will help enhance and bring forth all of the history and tradition in the area that can be transitioned and appreciated in the modern age.

Artists need to take into consideration the following requirements in relation to the artworks that they are expected to create:

The accommodation, travel and subsistence expenses, as well as the expenses of the materials needed for the creation of the artworks are covered by the project within the limits of its budget. Also, the project offers visibility and networking opportunities for the participant artists, as well as opportunities for commercial collaborations, in order for the artists to benefit economically from their creations.

Presentation of the Artworks

The artworks that will be created during the art residencies, will be presented in local arts exhibitions, which will be organised in each place after each residency. The exact dates will be announced in due time.

At the end of each art residency, the artworks will be digitised by Inter Alia, and will be published on the digital exhibition, which will be created and posted on the ECHO II website.

The digital copies of the artworks will be published on the ECHO II digital exhibition under the Creative Commons Attribution-ShareAlike 4.0 International (CC BY-SA 4.0) license, allowing their reuse and remix for any purpose under the terms and conditions of the license.

The metadata, i.e. the information documenting the artworks (title and type of the artwork, name of the artist, artistic technique, conceptualisation etc.), when published on the ECHO II digital exhibition, will be dedicated to the Public Domain, allowing their reuse for any purpose without terms and conditions. For more information about the Public Domain Dedication, please see the CC0 1.0 Universal deed.

Inter Alia has chosen this particular open access policy in order for the artworks and their metadata to be reused by the public for educational, research and other creative purposes. Inter Alia respects the fact that the ECHO II project is funded by the European citizens (through taxation), and wishes to offer them the possibility to get benefited by the creative results of ECHO II, during and after the project.

By accepting the open access policy of the ECHO II project, you also accept the reasons why Inter Alia has decided to digitise the artworks and publish them on the digital exhibition under the CC BY-SA 4.0 license. This means that you are a socially responsible artist.

CC licenses cannot be revoked. As soon as a copyrighted artwork and/or its digital copy is published under a CC license, it is and will remain open forever. A CC license can be changed only when a cultural work is significantly revised and altered (for example, in the case of a revised edition of a book). But the initial licence of the initial work, as well as any reuses based on this initial licence will remain valid. The inspirers of CC licenses incorporated this provision into their legal deeds, to ensure the openness of cultural works for the further advancement of knowledge and culture, and consequently, the further development of the economy and the well-being of the society. By applying CC licenses to your cultural works, you not only increase the chances of their becoming more visible and popular, but you also contribute to the open movement, its vision, mission and goals.

Artists who wish to participate in one (1) of the three (3) art residencies are invited to fill in this application form (to which they have to attach a short bio and portfolio) until the 26th of March 2021.

The selection process will be completed until the 1st of April 2021. All applicants will be notified on the results via email.

The selection will be done by the ECHO II working team based on:

The ECHO II working team monitors the situation closely, and will take all the necessary measures to protect the participating artists, the staff members and the local communities against the spread of COVID-19. In case the art residencies need to be postponed and realised on different dates, the selected artists sustain their positions, and will be timely notified for all the changes that will need to be made. In case an artist cannot participate in the residency due to the change of dates, she/he will have the opportunity to participate in one of the upcoming residencies that will be implemented in the frame of the project (see below: “More Information”). In case the artist denies her/his participation due to other reasons, she/he does not sustain the position, and if she/he wishes to participate in the final upcoming residency, is obliged to follow the application process, as will be described in due time.

For more information on the ECHO II project, you can contact Nikos Pasamitros (pasamitros@interaliaproject.com).

ECHO II is implemented by Inter Alia, in collaboration with the non-profit organisations Sfera International, Open Space Foundation, Pro Progressione and Balkan Beyond Borders, and with the contribution of PostScriptum, the small-medium enterprise that is responsible for the digital strategy of the project.

ECHO II is co-funded by the Creative Europe programme of the European Union.