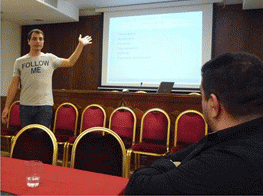 As usual, the session consisted of 2 parts, a theoretical overview and a discussion on the topic.

Nikos argued that all of the above mentioned approaches to corruption suffer from a definitional shortcoming: they all presume that corruption is a bureaucratic predicament either of the public or the private sector. Policy makers, leaders and institutional actors are presumed to be the “clean” principals with the mandate to secure the public from corrupt agents. However, what happens when corruption is the only game in town? What if anti-corruption is a negative sum game for whistleblowers? Beyond conventional wisdom, self-fulfilling prophecies and generic indicators, how effective is Greece at addressing corruption and for what reasons? After all, in a context where corruption is built-in in the system how easy is to not be corrupt? How “clean” is our own behaviour and how important that is? How has the crisis conjuncture affected corruption? Finally, how can a citizen in crisis-ridden Greece react to corruption and promote social change?

The debate that followed used the stated questions as starting points focusing mainly on the case of Greece. The main points raised and discussed can be summed up as follows:

Participants related the issue of corruption to institutional and administrative shortcomings that are well-known and prevalent in Greece. While there was an agreement that these problems should be immediately addressed, some discussants argued that even if the appropriate reforms were magically and perfectly implemented they would not solve the problem.

Policies do not take place in a vacuum, some participants argued – the action-reaction must be taken into account. In that regard, the participation of the citizens, but also initiatives on their behalf are essential.

Discussants agreed that, while useful, all of existing measurements of corruption present significant shortcomings.

For participation to exist trust and self-confidence are important.

Inter Alia, research and analysis coordinator, Nikos Pasamitros expressed his concern about gender-based approaches. He argued that theoretical schemes based on presuppositions on human nature are arbitrary and may offer legitimisation to racialist notions.

Especially in a time of crisis, even a fair reform related to corruption is expected to meet resistance.

Disenchantment with politics, lack of trust in institutions and in self, income decrease, and, after all, personal interest in maintaining the previous system would most probably obstruct anti-corruption efforts.

Discussants also focused on stereotypes and images of good and bad governance. There was an agreement that there is no perfect governance system as long as people themselves are imperfect. They argued that positive and negative images of “cleanness” regarding corruption tend to fulfill themselves and to maintain the image of divergences that, in some cases, do not par with reality.

Even in cases of states with, allegedly, low corruption levels the problem is always there. Participants argued for and against the necessity to refrain from addressing corruption in a moralistic context.

Endemically corrupt systems based on favouritism constitute a stage in social development that is passed from all societies and is probably an everlasting process.

As regards international institutions and the European Union, participants argued that a more comprehensive approach is needed in order for improvements to occur. Focusing on administrative shortcomings when the problem is systemic and endemic is not only irrelevant and, arguably, unfair but also highly counterproductive.