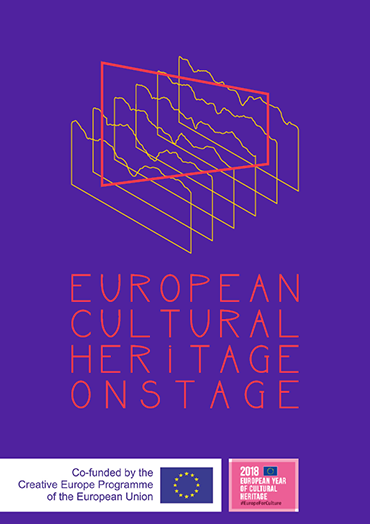 ECHO: European Cultural Heritage Onstage was a European creative project, implemented in the context of the European Year of Cultural Heritage 2018. It invited artists from the fields of painting, drawing, sculpture, installation, performance, videography and photography to create original artworks, after exploring the Dark Cultural Heritage of the Balkans.

Dark Heritage is connected to events that traumatise groups and determine their cultural identity. Such events concern societies, as physical and conceptual spaces related to war, genocide, mass killings, ethnic conflict, oppression, violence and death bear such moments in their heritage, tangible and intangible. Dealing with traumatic heritage may have therapeutic effects for locals and outsiders. War and conflict spaces exist around the whole Europe, thus dark heritage can be a starting dialogue point for artists and citizens.

Sfera International and Vojvodina Civic Center organised two art residencies and a series of local events in Bitola (North Macedonia) and Novi Sad (Serbia), hosting 8 artists (in total) who, during their stays there, created 39 original artworks adopting a critical stance towards the events of World War I and World War II. More specifically:

Sfera International organised one (1) art residency in Bitola, during which four visual artists (Ljubica Meshkova Solak from North Macedonia, Snezana Petkovic from Serbia, Ivanka Stavreva from Bulgaria and Aristaios Tsousis from Greece) created 18 original artworks, after exploring the events of WWI (Macedonian Front) and their impact on the local community.

Vojvodina Civic Center organised one (1) art residency in Novi Sad, during which four visual artists (Bojan Josic from Bosnia and Herzegovina, Depy Antoniou from Greece, Martina Lapica from Bulgaria and Kiril Konstantin from North Macedonia) created 21 original artworks after exploring the events of WWII (Novi Sad Raid) and their impact on the local community.

Sfera International and Vojvodina Civic Center also organised four (4) community engagement activities -two (2) in each local community- where the artists got together with the locals, and exchanged ideas and inspirations on the events explored by the project.

Open Space Foundation organised the final arts exhibition of ECHO that featured all the artworks created during both art residencies, along with other creative and artistic outcomes. The exhibition took place in Veliki Preslav (Bulgaria) from 4 to 7 April 2019, and was attended by representatives from the Professional School of Textile and Fashion Design (Varna town), the Professional School of Fine Art (Smolyan town), and the National Schools of Plastic Arts and Design (Kazanluk town). During its opening ceremony, the visitors had the opportunity to meet the artists, and discuss with them about their works, their sources of inspiration and the messages they wanted to get across.

Caravan Project explored the Balkan landscape of Western Macedonia in Greece, Bitola and its surroundings in North Macedonia, as well as Novi Sad and the Danube River in Serbia; and recorded this exploration by creating a photo book, and a short creative documentary titled “Dark Vein”.

The documentary is a travelogue that starts from the city of Bitola (or Monastir in North Macedonia) and the graveyards situated around it. It continues in different villages of Pelagonia that have suffered the woes of war and displacement. Then, it follows the lignite arc, the landscape transformation, the villages that were eradicated due to the mining process. And finally, it visits Novi Sad and the Danube river. The content of the film, that consists of graveyard scenes, gaunt human presence, images of nature, abandoned villages and elliptical soundscapes, reveals a muzzled place that resides on the margin, in the dark, as it is either connected to dark pages of History, or consciously sidelined due to a society bound to the chariot of “constant progress”, systematically degrading the environment around it.

During the project, the documentary was screened within the framework of:

Inter Alia presented the theoretical framework, the concept and the outcomes of ECHO in the above mentioned conference, as well as in the 5th Conference of ESDIAPOK (the Association of Cultural Heritage Consultants in Greece), titled Cultural Heritage and Local Communities: Issues of Participation, Co-operation and Co-management, that was held from 22 to 23 November 2019, in Athens Greece (short report about the conference on ESDIAPOK’s blogspot, in Greek).

Also, Inter Alia organised a final event in Athens, providing the opportunity to the Athenian audience to see the artworks in digital format, and watch the Dark Vein documentary. This event took place at TWIXTLAB on 20 June 2020, and was attended by art lovers who met and had a discussion with some of the creators coming from all partner’s countries.