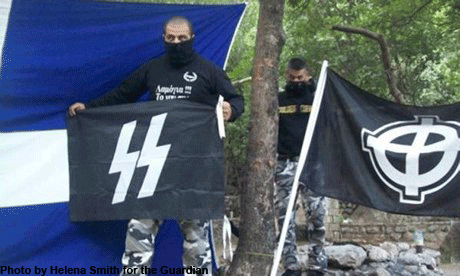 Eleni Stathopoulou is a PhD Candidate at the Department of Political Science & History at Panteion University in Athens. Her thesis is on citizens’ attitudes towards the democratic institutions in Greece and was awarded with funding by the European Union and Greek national funds (Research Funding Program: Heracleitus II 2010-2013). She is currently also participating in the research project the “Designing & Operating an Infrastructure for the Empirical Inquiry of Political & Social Radicalism in Greece” – THALIS project (EU Framework Program).

Since the outbreak of the financial crisis in 2008, the rise of the far-right across Europe has become part of conventional wisdom. The claim that economic crisis breeds extremism, brought up questions regarding the quality, stability and future of contemporary democratic systems. Is there, after all, a crisis of democracy to be diagnosed?

In political philosophy as well as in political theory there is a wealth of theories concerning the crisis of democracy, from the classic texts of Plato and Aristotle to Karl Marx and Max Weber and, in recent years, the theses of Colin Crouch (Postdemocracy) and John Keane (The Life and Death of Democracy). The crisis debate grew, starting from the 1970s with theories that stemmed equally from the whole right-left ideological spectrum, attempting to elaborate on the causalities of a crisis of democracy. Additionally, recent growing concerns for the future of democracy find reason in the fact that far right parties hold on views that are opposed to main aspects of liberal democracy or are “antithetical” to democracy. Except from Golden Dawn that constitutes the focus of this analysis, other examples of highly publicized parties are the National Front in France (FN) and Jobbik (Movement for a better Hungary) in Hungary.

The result of the 2012 parliamentary elections in Greece signified the systematic restructuring of the political arena, with the two main parties Nea Dimokratia and PASOK suffering significant electoral losses. The end of “political normalcy”, the defeat of the two-party system and the entry of the radical right party of Golden Dawn in the parliament, occupying 18 parliamentarian seats and gaining 6,97% of the votes, marked a new era in Greek politics. However, the turning point in GD’s electoral success was already realized in the 2010 municipal election, when the party’s leader Nicholaos Michaloliakos succeeded in being elected to the municipal council of Athens gaining 5,3% of the vote. That was the first time, since the party’s formation in 1983, that it obtained representation in a public rule-making body.

For a marginal party, like Golden Dawn, entering in the Greek parliament in the national elections of 2012, was a big success. However for everyone else, it came as a big shock. Often in the media, the rise of GD has been interpreted as the foreseen aftermath of an economic crisis and often also paralleled to another Weimar all over again. Thus, the widespread idea that economic crises lead to the reinforcement of far right parties, which has its roots in the historical example of NSDAP (Nationalsozialistische Deutsche Arbeiterpartei – National Socialist German Workers’ Party) in Germany gained more support. However, the Weimar occasion was an exception to the rule in the interwar period, as is now Golden Dawn in the European context. The argument that crises lead to the rise of extreme right parties lacks sufficient evidence. A straightforward confrontation is the fact that not all countries that experienced the rise of an extreme or radical right party were affected strongly by the crisis; France or Austria, for instance, did only slightly come through an economic distress.  That is not to say that economic crises are completely irrelevant to the electoral gains of far right parties rather that this is a quite simplistic explanation, therefore historical analogies to Weimar Republic lack serious evidence.

Greece was indeed heavily affected by the economic crisis and this challenged the political system at its core, surfacing the weak foundations and democratic deficit. The demand for faster political decision-making illustrated a particular democratic paradox: Far-reaching crisis decisions had considerable welfare and redistributive consequences. Thus, especially those decisions required reliable, democratic input political support and consequently legitimacy. However, in the period 2010-2012, Greek parliamentary practices operated under emergency procedures in order to pass the austerity reforms, which aggravated the economic conditions of many citizens. The objective or assumed time constraints typically resulted in decision-making with thin input legitimacy.

Besides, political support and trust for the representative institutions of democracy, like the parliament, the parties and the political personnel was demonstrated in Eurobarometer surveys to fall systematically reaching a record low in 2010 and even lower in 2014. Political trust in Greece was built on the weak foundation of a clientelistic system, a direct exchange between voters and elected personnel with the “absence” of civil society actors as mediators in this relationship. The challenges to the Greek democratic system can be summarized as follows: the economic crisis challenged the stability and quality of the democratic system, representation and participation deficits. What the crisis did is to cause developments on economic, political and social level that were favorable to the rise of far right parties.

However, as factors to be indicated for the electoral success of GD is not only the thin political trust or the economic recession. GD through its political views and social presence, also builds on the “hidden” trauma of the Civil War. The GD members position themselves systematically against the Left, organizing commemoration festivals about the victory of the Civil War. The absolute dividing stance in public discourse of GD (We against all others) seems quite similar to the polarized situation during the Civil War, which divided communists and anti-communists. This dividing line is also present in other forms in the collective memory of the Greek nation, i.e. the Greek ancient heritage and the Greek Orthodox Religion presented always as integral parts of the united Greek identity that survives through the centuries against the others.

The question to be answered is how threatening is the presence of an extremist party like GD in the Greek parliament for the stability of the Greek democracy. Is there a crisis of democracy to be diagnosed? Research on democracy fails to empirically prove a crisis. On one hand, political theory provides hypotheses that are hard to be proven empirically and on the other hand, empirical research has only diagnosed partial challenges to democracy. The difficulty in answering the “crisis” question is multifaceted. A democratic system consists of institutions that have to be evaluated individually and as a whole, accounted for their democratic processes and their policy effectiveness and furthermore the support that the citizens show to the system has also to be taken into account.

Furthermore, the time that a crisis begins and ends is relatively vague. Does a crisis begin when a far right party is founded or when it has parliamentary representation? Does a crisis begin when the electoral turnout falls and if yes, then which would be assumed as a worrying percentage? Does a crisis end with the outlaw of an extreme party?  The Greek case presents an example of a country that is facing a severe economic crisis that led to higher levels of inequality, poverty and protest. The political system went through a dramatic change from single-party governments to coalition governments. The two big political parties that played a crucial role during the last 30 years lost half of their electoral power. This can be read also as a consequence of escalating crises that could potentially lead to an existential threat to democracy.

However, against all Cassandras, democracy in Greece still survives. If we want to talk about acute crises that cause instability to the democratic system then we have to seek for political actors that will attempt this. If major antidemocratic movements or parties emerge, with powerful mobilizing mechanisms against democracy, only then can we talk about an acute crisis of democracy. GD as a party antithetical to democracy poses for now a major challenge of democracy in Greece. The charges brought against GD in 2013 limited their mobilizing campaigns, however GD in the last election of 2015 maintained their vote share. The main problem is not to answer whether or not there is a crisis of democracy but to address the current challenges.

If you wish to submit an analysis piece, email us HERE or HERE