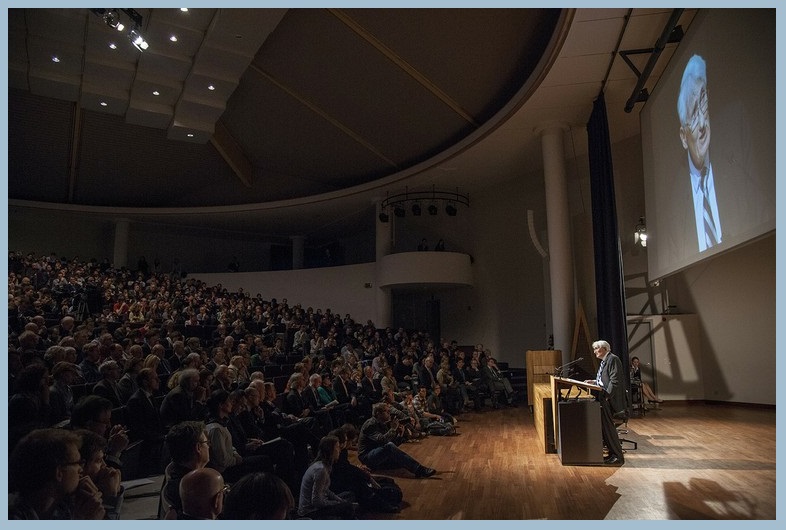 “Increased cooperation between the European member states is unpopular but necessary if the European project is to be saved,” said Jürgen Habermas in a public lecture on Friday, 26 April delivered to a packed and enthusiastic Pieter De Somer Auditorium.

Habermas, 83, is perhaps the most important living philosopher and sociologist and is one of the most influential intellectuals of our time. His appeal was clear: more than 1,200 people turned up to hear him speak.

In addition to the 800-strong audience, several hundred people watched a live broadcast of the lecture in the main auditorium of the Maria Theresia College and dozens braved the rain to watch the broadcast in the Stadspark. The speech was also live-tweeted via @LeuvenU.

‪Van Rompuy also stressed that the EU must find a new form of legitimacy: “The European Union is only fully legitimate with the broad support of the people. We need a real debate involving the public – in all our countries. But that debate must not be based on passions and clichés.”

Light at the end of the tunnel

‪Habermas opened his lecture with a sharp analysis of the problems facing the EU. The gap between citizens and policy has never been wider. The European Parliament was envisioned as a way to bridge the gap, “but that bridge is almost devoid of traffic,” says Habermas. Euroscepticism is the only perspective uniting European citizens today. Meanwhile, policy is determined by short-sighted politicians who push for “more Europe” solely to avoid an expensive exit from the euro. ‪This poses a threat to Europe’s legitimacy and democratic basis, says Habermas.

‪Acknowledging the need for reform, the European Commission, European Council and European Central Bank proposed a reform plan – the so-called Blueprint – in December 2012. ‪The document looks beyond the recent crisis and focuses on causes embedded in the structures of the Union itself. Habermas welcomes the attempts to reform, but remains sceptical: “This plan was created by the three institutions farthest removed from the European citizens.”

Habermas laments that that Blueprint does not address the democratic deficit until after the proposed structural reforms have been carried out. “The promise of democracy is presented as a light at the end of the tunnel.” First reforms and then democracy. “Postponing democracy is a rather dangerous move, as it could give rise to a technocracy without democratic roots.” And without the support of the general public, politicians will be too weak to respond to economic problems.

‪”We are trapped in a dilemma between the economic policies required to preserve the euro, on the one hand, and the political steps to closer integration, on the other. Increased cooperation is unpopular with European citizens but is necessary if the European project is to be saved,” says Habermas.

As befits a great philosopher, Habermas proposes his own alternative: extending the monetary union into a genuine political union. This would lead, for the first time, to a differentiation between “a core Europe” and a periphery. The feasibility of amending the European treaties would depend essentially on the consent of countries preferring to stay out. In the worst case, resistance could be overcome by “re-founding” the Union based on the existing institutions

In Habermas’ political union, members are called upon to abandon the idea that nation states are “the sovereign subjects of the treaties”. Sovereignty as a foundational concept must carry less weight in the new treaties. But this is not a step in the direction of a ‘United States of Europe’. Member states would maintain their integrity. The relationship between the Parliament and the Council would change significantly as well – with both on equal footing.

Habermas recognises that the necessary steps towards political union are not easy. Political will is lacking. With this in mind, Habermas sees a decisive role for Germany: “Germany has the keys to the fate of the European Union in its hands. If there is one government among the member states capable of taking the initiative to revise the treaties then it is the German government.”

‪But, as Habermas is careful to point out, this implies a ‘Germany in Europe’ rather than a ‘German Europe’. Germany must heed lessons from the past and avoid aspiring to a semi-hegemonic status in Europe. ‪This is in Germany’s national interest because such a status leads only to conflict.

‪The question Habermas poses is not whether Germany should take the initiative to reform the treaties, but why. ‪Germany must have an interest that goes beyond the shared interest of all member states. Habermas’ philosophical and political answer: solidarity.

Habermas emphasises that solidarity is a political act and is in no way a form of moral selflessness. It is an attractive concept because it pays off in the long term. Habermas likens the concept to one’s ethical obligation to family: If a distant relative calls to ask for a favour, you will agree to help only if you can count on that relative to do the same for you in a similar situation. In other words, solidarity works according to the principle of “predictable reciprocity”. This, according to Habermas, can be extended to political communities bound by shared goals.

Habermas concludes that the monetary union can only be saved through solidarity: “‪Providing loans to over-indebted states is not enough. What is needed is a cooperative effort from a shared political perspective to promote growth and competitiveness in the euro zone as a whole.” Such an effort would require Germany and several other countries to accept short- and medium-term losses, confident in the conviction that solidarity is in their – and our – long-term interest.