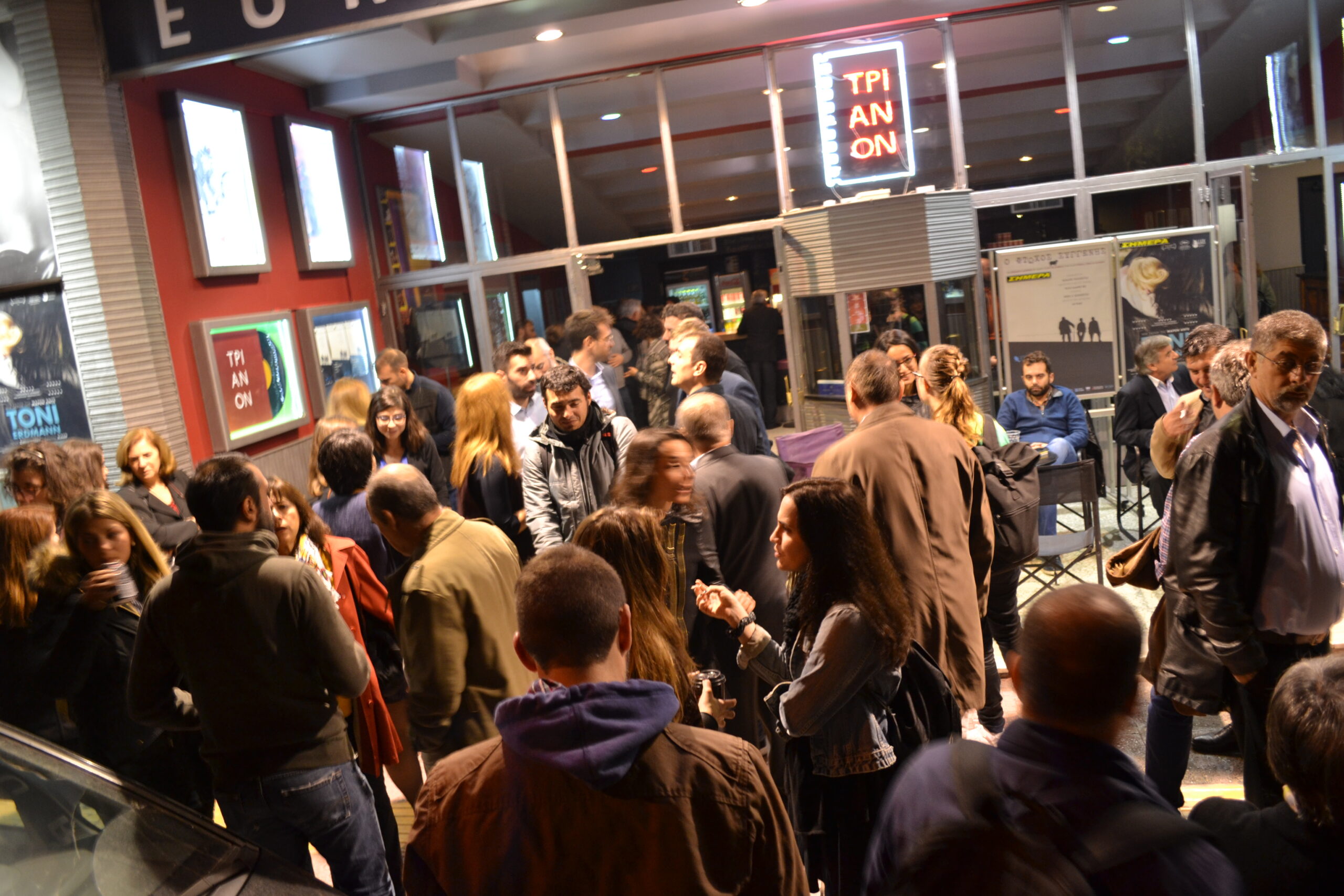 Friends, supporters and a significant part of the cultural community of Arta attended the screening and shared their thoughts and opinions with the film’s producers. The issues raised in the film sparked a heated debate with the public about the impact of EU funding within communities as well as issues of mismanagement and corruption. “The Poor Cousin” is a road movie that seeks the causes of corruption in a context of poverty, ignorance and frustration. It tackles the realities and challenges of small communities in various European countries which are considered problematic compared to the standard set by the EU.

The Poor Cousin is a production of the non-profit organization Inter Alia and was created in the framework of the “Ask the Locals!” project funded by the “Europe for Citizens” programme of the European Union. The screening took place with the support of the Arta Cinema Club. The Poor Cousin continues its journey at national and international level in order to inspire and to spark action among citizens.

“The Poor Cousin” was publicly screened at MOVE.BG – the platform of the creative people. Around 20 persons from different fields were present –academics, NGO activists, Bulgarians residing abroad, historians, social workers, etc. The majority of them were young people who manifested a particular interest in “The Poor Cousin” and the wider project “Ask the Locals”. They all reflected critically on what they saw and shared their recommendations for future final products and similar studies of this type. This set the stage for an exciting discussion initially moderated by Dimitar Dimitrov and with the active participation of Dr. Todor Yalamov. There were different and more widely focused views on the topic and the informal discussion combined with a glass of wine that lasted for more than an hour. All the participants were confident that “The Poor Cousin” deserves to enjoy greater publicity and to be screened and discussed far and widely.

“The Poor Cousin” was publicly screened for the local community in the small village of Chavdar which was the focus community for Ask the Locals! project. The screening took place in the local community center and was well attended by around 60 people including the mayor and fellow councilors. Dr. Todor Yalamov from the Center for the Study of Democracy and Dimitar Dimitrov who worked with the local community in the course of the film-making, presented the movie to the audience. After the screening they opened the floor for a brief discussion with the locals who expressed their gratitude and satisfaction with the final product. While the discussion was not particularly substantial due to the older age of most attendees, when the mayor took the floor he pointed out how upset he is with the recent reform in the way applications for EU funded projects are evaluated – on a point basis relative to the size of the municipalities. In his words, regardless of the previous record, knowhow and practices, the smaller a municipality is, the lesser its chances to get EU funding and execute a respective project.

Youth Alliance Krusevo implemented the first local event to raise awareness through the screening of the documentary “The Poor Cousin” on 29.11.2016. YAK has decided to organize the first local awareness event in MIT University because of greater involvement of young people who are in YAK’s focus, bringing an extremely sensitive topic to them, that allocation and misuse of European funds and resources. After the screening of the film a fruitful discussion has started regarding the issues which treats the film. Strong impressions evoked great interest among the young students. The young people were very stimulated to discuss regarding the EU funds in their environment, the majority of them didn’t had any knowledge or information regarding this topic, as a result of the projection they were strongly inspired to look in their communities whether there is EU funds and are they properly used.

Screening of the documentary “The poor cousin” in Krusevo

After exactly one year the YAK working group of the project “ALO – Ask the locals” which held its Info Day in Krusevo and asked the locals for the EU funds in their community, returned to screen the documentary film “The poor cousin”.On 11. 01. 2017  in the  Pizzeria Skar in Krusevo, in snowy Krusevo  and  with- 20 degrees C were gathered over 30 locals to watch at the movie that was filmed in their town. In a cozy atmosphere accompanied by a hot tea at the local pizzeria the locals watched  the movie in one breath. Likewise, they got a chance to hear the opinions of a few loklaci from their town, Miki Kostovski Biljana Stojceska Father Milan Nicevski.

After the screening of the documentary “The poor cousin” has started a discussion among the team of YAK and the locals about the possibilities offered by the small communities in order to be involved in thied community.  In addition, they raised the question about the similarities and differences of the countries involved in the documentary. Which are significantly different in terms of economic development at state level, but the involved communities and people had several common issues regarding this topic.Finaly the conclusion of the whole discussion was that the locals in Krusevo are  largely indifferent and uninformed about issues that directly affect them, therefore “The poor cousin” tried to raise awareness of Krusevo locals and touch them closer. Eventually some of the locals felt demotivated because they realized that the same problems are facing also  the locals in other more developed countries then Macedonia who are already EU members states, while some of the locals were encouraged to be more  involved in the local community and to be more interested what and with what purpose is invested  on their street.

The first screening of the “The Poor Cousin” documentary in Bacau took place on the 16th of December 2016, being hosted by the “Vasile Alecsandri” University, and organized by the Romanian Youth Movement for Democracy Association.

The screening had a strong impact on the viewers, generating a discussion around the concept of community and the need of more united local communities. Starting from the good experience of Chavdar village (Bulgaria) with the European funds and its’ people positive opinion about their representatives, the audience in Bacau developed the idea that the sentiment of belonging to a community is vital for the benefit of all the citizens. The main idea people got from the documentary in Bacau is that it is not enough to be upset or angry because the funds are not efficiently spent. Instead, people need to find a common ground, to establish a set of principles and values and to take action in order to create a place to live in as they want. Some have resumed that the critics are good, but citizens involvement is much better and more sustainable!

The screening of “The Poor Cousin” was organized in the Cultural Centre ‘Vuk Karadžić’ and was attended by young locals from Bujanovac and the nearby towns and villages. The region, in spite of a number of EU-funded infrastructural projects being implemented in the past years, remains one of the least developed in Serbia. It features the highest unemployment rate and numbers of economic migrants, especially among the minority communities. After the screening, youngsters had a short talk about the topic and the messages of the movie. Most of them described the current image of Serbia as tragicomic but, strangely enough, they also felt relief to see that fund-abuse is not something that only affecting their country.

The screening that was held in the Human Rights Center in Belgrade was attended mostly by the older generation, people who are not really informed about the EU accession progress and are not aware of funding opportunities in the process of joining the EU. In a debate held after the screening, the audience said they were left with a bitter-sweet impressions. On the one hand contend that their problems were brought to the fore and, on the other, sad because their situation of their communities remains poor. Besides, most of them concurred that now they feel the Greek crisis was explained to them through words of ordinary people and that it left much stronger effect than from the reports they hear in the news. Part of audience shared their impressions that the movie resembled a promotion of Bulgaria. Finally, many thought that it should be played on national and local TVs, to show people what is certain to happen to Serbia if we don’t learn the lessons from Greek crisis.