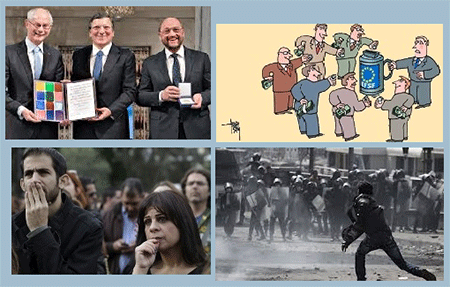 Popular trust in the European Union, or rather the lack of it, has commonly been singled out as one of the most intricate challenges in the process of EU integration. According to the Eurobarometer survey published in autumn 2012, Europeans’ trust in the EU’s institutions has lately hit a historical low (31%, down by 3% in comparison to 2011). Obviously, this recent downward trend can hardly be separated from contemporary developments such as the economic crisis and the insecurity it generates or from structural deficiencies that have been aggravated and become more visible due to the crisis.

However, the underline cause of Europeans’ distrust, seem to be more conceptual rather than economic or structural. The lack of a generalized agreement on the finality of the EU’s integration has resulted in the lack of a functioning and democratic system of interaction between constituencies and rule making elites at the EU level. Thus, it has hindered the action-reaction sequence that would lead to the Union’s organic evolution towards a sound multilevel governance model.

The pace of modernization of governance regimes has historically been set by the interplay of political elites and the middle class (arguably with only a couple of exceptions). In the post-post-Westphalian context, that is in the globalized environment of the 21st century, a third, less visible, factor made up by “market forces” (that is the latest euphemism for economic lobbies and hedge funds) has come to play a central role in policy formation through its increased economic leverage on policy makers.

The EU’s institutional progress is, to a large extent, dependent on the above mentioned triangle and the interaction of forces within it. As regards rule making elites, the importance of leadership in the process of political modernization cannot be overstressed. Strong leadership can bypass periods of transition or crisis and precipitate their overcoming through inspiring trust and inducing required action without necessitating elaborate administrative exemplifications.

However, either due to the complex character of multilevel politics that necessitate (incomprehensible to most) delicate management and unsexy rhetoric and agendas; or due to concessions to lobbies and MNCs; or to the straightforward difficulty to communicate EU politics to the public; or to the necessity of preserving EU as a scapegoat to unlikeable decision making, a governance change from above through effective leadership, currently seems highly improbable.

On the other hand, the gravity of “market forces” on the process of EU’s political modernization is also grave; but highly unlikely to promote sustainable change of the EU’s institutional framework. Reversely, economic lobbies’ considerable economic leverage on political elites at the EU level constitutes an important obstacle to the democratization of the EU governance regime. It further complexes the decision making process and makes it harder to communicate to constituencies. Moreover, through utilizing their position close to rule making elites and the respective market advantages, “economic lobbies” raise distrust towards the institutions that define market rules.

While both political elites and market forces individually have a strong impact on the EU’s institutional evolution, it is the quality of their interface that is definitional of the overall process. The reason for the strong ties between them is not, necessarily, related to rent seeking by the former or to aspirations for global dominance of the latter. Reversely, they imprint the inability of national governments or transnational institutions, such as the EU, to cope with market pressures applied by powerful economic lobbies that have, to one degree or another, defined the economic universe within which political elites have come to power.

This entrapment of Politics is derived, to an important extent, from the inability of European leaders to inspire drastic change that would imply massive and dynamic popular support. The lack of effective and charismatic leadership originates at the low self-confidence of European political elites. In turn, low self-confidence results, on the one hand, from the reliance of political systems throughout Europe on economic elites that breed a relation of uneven dependence and promote the leaders that are more likely to maintain the existing state of affairs.

On the other hand, it derives from the strong influence of domestic middle classes and the high level of political modernity (strong civil society, freedom of media, government transparency etc.) that, as a rule, has dramatically reduced their life circle, has re-oriented their social partnerships, and has curtailed the dynamics of internationalism at international fora. Thus, it appears that any noteworthy change of the existing closed access regime of EU governance could only be realized through the mobilization of the, currently voiceless and largely apathetic, middle class at the EU level.

In theory, one of the main reasons for political apathy is lack of trust (in self, society, institutions) that hinders collective action. In the case of the European Union and the post-post-Westphalian system of governance a new kind of social and psychological obstacle to collective action is observed, which here will be titled, lack of “transnational social trust”. To put it simply, Europeans do not believe that their concerns or assertions will be shared and supported by other Europeans due to their image of them as different and to the psychological impact and cultural embedment of realist perceptions of confrontational world order.

Of course, practical obstacles to transnational collective action such as language, distance, ethnic stereotypes and tangible cultural differences, etc., are not disregarded. Reversely, it is only fair to mention that the European Union constitutes a collective action nightmare due to widespread and fragmented legal frameworks, conflicting mandates, lack of popular understanding and knowledge that are increasing free rider considerations etc. However, historically, any governance construct where the middle class was politically apathetic or inactive was doomed to stagnation and decay.

As long as European middle class remains weak and fragmented, the interplay between the remaining two factors that define the process of modernization (economic lobbies and rule making elites) will continue undistracted. The lobbies will bend decision making their way, thus, rendering conditions of economic shortage increasingly relative/flexible for themselves and increasingly relevant for the shrinking middle class. The European political leadership, for its part, will play the blame game with European institutions for maintaining power and diminishing domestic reaction.

Europeans share an economic policy and, to one extent or the other, an economic future. In that context, it is apparent that national level collective action is insufficient and that EU level mobilization is essential. Lack of trust constitutes the main obstacle in this process. It is self-perpetuated, takes root fast and deep and is not easily displaced.

As long as the European middle class does not use its potentials for reversing this course and proposing a convincing long term perspective of democratic governance through collective action, uneducated stereotypes aiming at short term political gains will prevail. Apparently, there are going to be more chances for collective action in the future; however, it is questionable under which circumstances of relative deprivation and in what sociopolitical context.