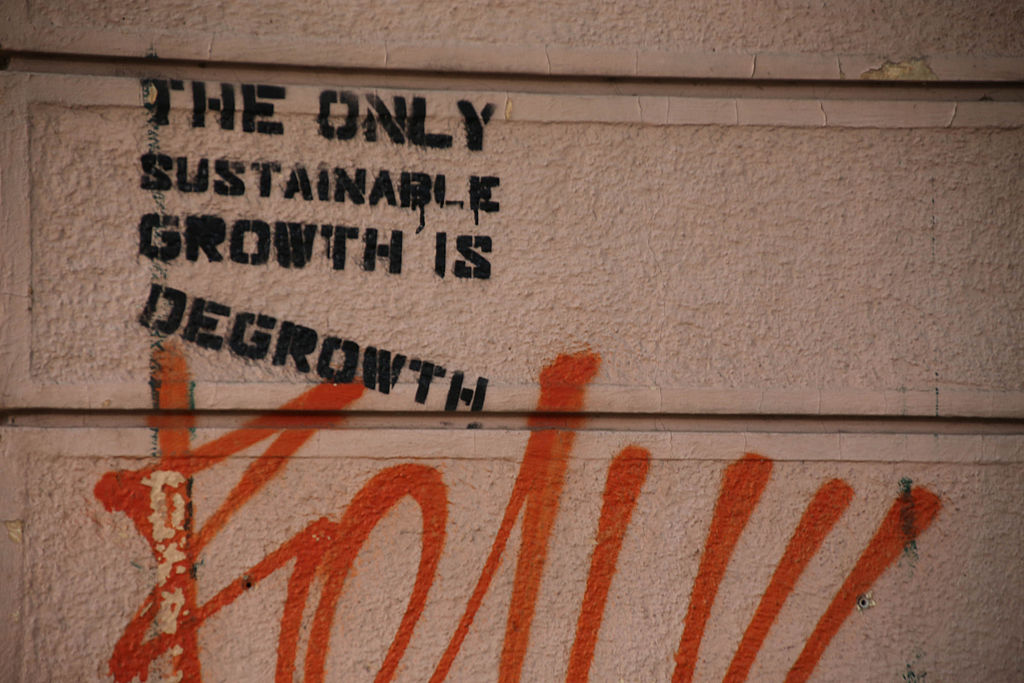 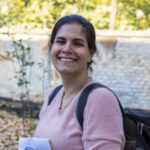 “Degrowth” is related to a socio-ecological and economic transformation that is characterized by lower consumption and production – without implying the decrease of well-being. It is traced back to the anti-industrialism trends of the 19th century.  It examines the environmental impacts and their relations to the current economic system associated with economic growth, consumerism and materialism.  In this sense, most of the alternatives proposed, we could say that concern the industrialized countries. Although, this does not imply that non-industrialized countries should follow similar economic development paths as the industrialized ones. It has links to ecological economics and shares some common values and aspects with movements, such as the Commons Movement, Buen Vivir, Feminism Movement, and others.

Firstly, let’s describe our mainstream western socio-economic system and its impacts on our natural environment. This system heavily depends on resource extraction, materials processing and wastes generation for the production and consumption of goods and services. As the resources become exhausted (see oil and coal) and the environmental health deteriorates, the system will introduce new technologies and innovations (techno-fixes) to continue working as it works now. However, despite technological efficiency, industrial and mass production still causes different types of environmental and health problems. This is because regardless of technological changes, the system is built on fossil fuels and creates products mainly and purposely with a limited lifespan. Why is this happening? This kind of economy aims to maximize profits, aims to achieve higher Gross Domestic Product (GDP) rates every year, aka economic growth, resulting in high level of Greenhouse (GHS) emissions and wastes. It is a vicious circle. The Story of Stuff explains this kind of material economy.

Nowadays, there has been a shift to renewable energy resources and other “green” solutions (green techno-fixes).  We experience the emergence of smart cities, Green Growth and Green entrepreneurship, Blue Growth and other impressive ways of dealing with the lack of natural resources. I will not get into the details on how questionable it is to perceive nature as resources available to be exploited and used. I will, however, highlight that these fixes do not seem to deal with climate change either. Despite the use of environmentally friendly technologies and the energy efficiency in production (circular economy), several environmental and social problems still exist. This happens because the current economic system requires more growth, constant cheapening of production resources and high rates of consumption in order to survive. Furthermore, there is research that proves that basically decoupling environmental problems from economic growth is not as possible as it seems on paper (see rebound effect).

Now I will move on to my next favorite thing, the externalities! Our decisions influence the lives of others and vice versa (positively or negatively). In a mainstream economic textbook, you could find this as “externalities” in economic terms.  Environmental externalities do not seem to care about borders. If you continue doing business as usual, for example, and try to externalize your environmental costs somewhere else, you are still hurting the environment (and the society).

An economist could tell you that there is a solution to this! Externalities are typical effects of our mainstream economic system because the markets are not perfect (or the property rights are not well defined). You could internalize these externalities by assigning monetary values to the costs and benefits produced by your actions. Imagine, for example, that you produce a quantity of a specific good and pollute the environment. Then, you are creating negative externalities. Assuming that you do not take into consideration this cost when pricing this particular good.  If the government applies an environmental tax equal to the amount of this external cost that is monetized, then you will be forced to produce B, less than A. Voila! Another tree will be saved! BUT, by doing that, you are still working in the market growth dependent system with imperfect market mechanisms and laws. Besides, how sure can we be that economic valuation methods that are used for the monetization of externalities are as robust as they intend to be?

On a macroeconomic level, it seems that countries with access to natural resources are considerably “wealthy” (measured by high rates of growth). However, since the environmental impacts do not stay in one place and most of the “wealthy” countries are industrial countries, their economic wealth is at the expense of others. The gap between the levels and speed of “development“* different countries will always create social problems. For the most industrialized countries, someone could propose to transfer money or other type of resources (eg. technology) to non-industrialized countries. As the mainstream economic system relies on competition and calls for countries to be “more competitive”, the latter will attempt to follow the economically developed and modernized countries’ paradigm and growth dependency. Even if they use new environmentally friendly technologies, the problems of the current economic system will still exist. It is a matter of historical justice.

Maybe these seem to be too critical. Indeed, someone could say that doing something is better than doing nothing. Nevertheless, we still have not solved the historical structural inequalities in social, economic and environmental levels. High levels of growth as a means to use new green technologies or promote more just materials and resources distribution is short sighted, it is not a sustainable solution.

Looking at the global social changes and the radicalization of communities, aiming for higher growth seems to undermine the planet’s balance. Our values and our sense towards happiness and well-being are under question. We have separated ourselves from nature and the ecosystems. We have even twisted the definition of democracy.

How does Degrowth propose to redefine the meaning of good life beyond the growth fantasy?

Let’s assume that, indeed, there are limits to growth and that there are no resources left to use. What does this mean? Does this mean that considering the current high birth rates and unsatisfied human needs we are all going to suffer? Not quite.

Degrowth is about redefining how things work in the current unsustainable system, focusing on the values of cooperation and sharing, as well as social and environmental justice.  Although we cannot change the current systemic operations in a day, we can move beyond the traditional, market related economic and social practices. Below four different but interrelated levels of change inspired by Degrowth are proposed:

The educational system plays an important role in opening up new alternative perceptions and possibilities. It is important for the people to be well informed, politically and socially aware. Despite the need for higher employability, being critical, analytical and empowered to participate in the community are crucial for socio-ecological transformation.  Hence, we are talking about a model of education that incorporates new forms of learning (as well as unlearning) and institutions (such as youth centers, social labs) that support the empowerment of (young) people and foster social and political participation.

2. Local soft development & Culture of being in common

Alternative economic models should be explored. The social and solidarity economy (social enterprises, cooperatives), and the sharing economy in particular (co-housing, shared community spaces, tool-sharing) are alternative models that could co-exist with a market (where market is not a competitive mechanism for growth) but at the same time do not allow for over production or over consumption.  It has been observed that these models work more on a local level and additionally, imply a different way of thinking, a more systemic thinking and sense of community. In this sense, local communities, especially the rural areas or communities at the municipality level, could form policies, provide information and training that support the multiplication and up-scaling of these alternative economic models.

There is high concentration on work productivity and profit, which is related to the national economic targets measured on indicators such as GDP.  It is a political discussion and direction that has influenced the mindsets of the people.

Sometimes we work to survive and not to live. We work under unjust, dangerous conditions and under pressure. We do not have time to enjoy life or do other non-paid activities, such as community work. Sometimes, people see volunteerism as something unimportant and a loss of time. The third economic sector is not considered a valid part of the national accounts because its benefits are not easily visible (i.e. expressed in monetary terms). However, it has been said that volunteerism, acts of care and social activities increase happiness and self-fulfillment. Of course, if you have to pay the rent, eat, provide for your children and family, it is not easy to do other “non-work” related activities.  Nevertheless, if you are in a community where the sharing economy is officially recognized, it might be a little easier to rethink your values and the purpose of working. Thus, the state could use alternative indicators for measuring the national well-being (eg. Gross National Happiness Index, Happy Planet Index) or even use a more holistic approach for measuring wellbeing (non indexes) and provide incentives for more socially inspired activities.

If the market competition in the cities is so strong and you cannot compete with a social enterprise or a cooperative, you can still have a socially and environmentally responsible enterprise that provides jobs to young entrepreneurs with environmental responsibility and invests in social innovations. Furthermore, consumption can be also responsible, supporting environmentally friendly enterprises, fair trade and local producers.  Social innovations could make a great difference if we think about how we consume, produce, move and become entertained every day.  For this reason, it is important to apply environmental and social business standards, as well as provide information and raise awareness on alternative consumption patterns. Circular economy could act as the most direct alternative within the mainstream economic system producing less waste and using less materials. Although, producing, consuming, exploiting and destroying less should be the initial aim. It comes back to less growth. Otherwise, it is pure greenwashing…

When I write these, I bring to mind the solidarity movements over the last decade in the European South that experienced the economic crisis. It is true that things might not be great, but there is hope when people are gathering and working together.

*I am purposely using “developed” and “undeveloped” connotations cautiously to characterize a country since this is another important debate that lies on post-development theories and history of colonization.