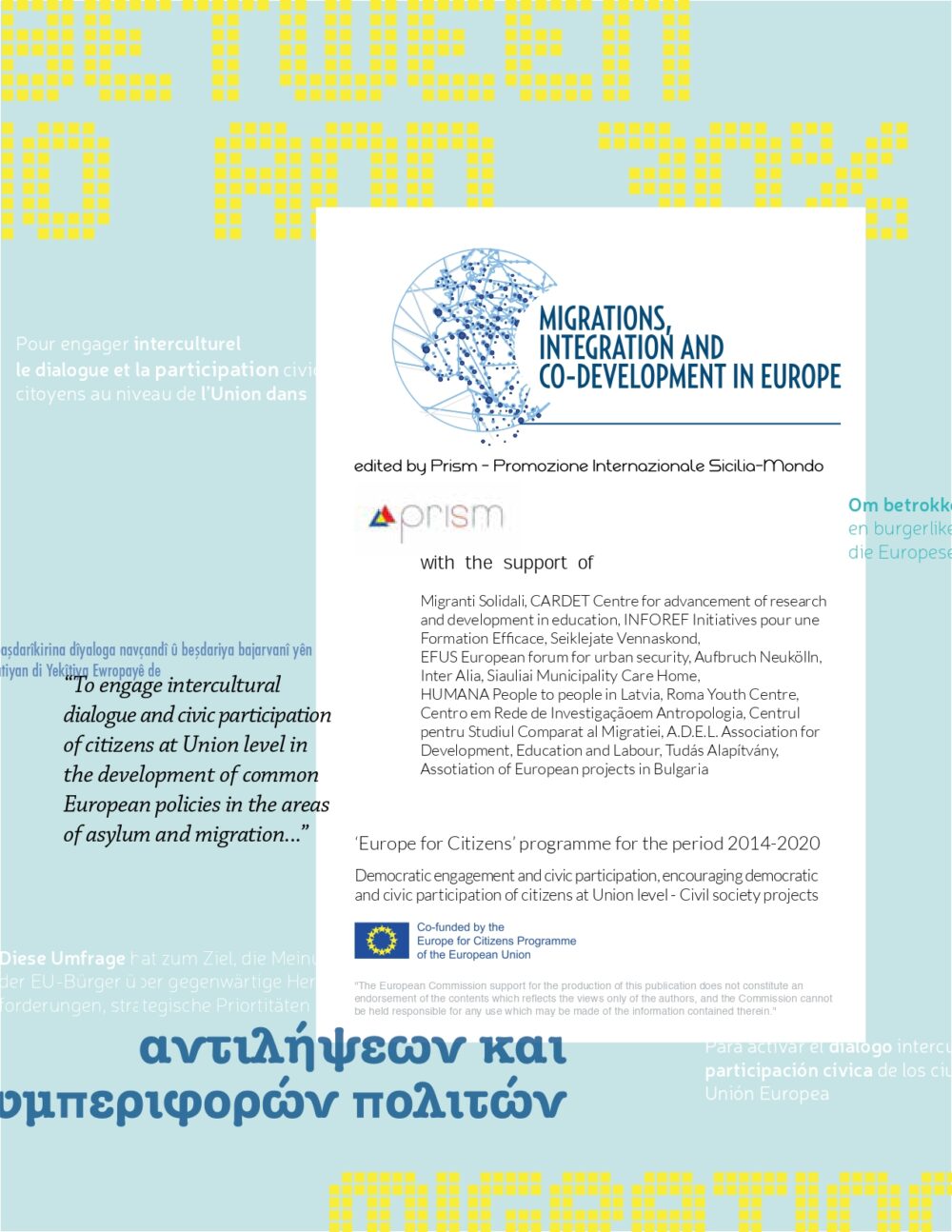 Migrations, Integration and Co-Development in Europe: THE FINAL BOOKLET

The project, funded with the support of the “Europe for Citizens” programme, has created an intercultural platform for dialogue and lively cross-border debate among European citizens on policies related to migration and asylum in Europe. According to estimates by the UN Refugee Agency, UNHCR and the International Organization for Migration, IOM, persecution, wars, conflicts and extreme poverty have forced an unprecedented one million people to flee to Europe in 2015. As stated by the European Commission, the EU’s external borders have increasingly been the scene of human tragedies to which the EU, together with its Member States, must take immediate action through a shared and more coordinated approach in accordance with the fundamental values at the heart of the European Union and international laws.

The first chapter briefly presents the project, its objectives, activities and the international partnership.

the state of play on the implementation of the priority actions under the European Agenda on Migration.

The third chapter include the main findings from the online survey that has been launched within the project.

that have been developed by the consortium.

The fifth chapter reviews the general information on the rules and conditions governing the European Citizens’ Initiative, as a possible follow up of the project.

The contents do not necessarily reflect the official views of all partner organizations and do not intend to be exhaustive in their treatments of the subject nor on the specific topics addressed in the current European Agenda on Migration.

Migrations, Integration and Co-Development in Europe: A SURVEY ABOUT EU POLICY ON MIGRATION AND ASYLUM: YOUR OPINION COUNTS!

A SURVEY ABOUT EU POLICY ON MIGRATION AND ASYLUM: YOUR OPINION CAN BE HIGHLY VALUABLE!

Inter Alia takes part in the Consortium of the project “Migrations, Integration and Co-Development in Europe” launching a survey on a common EU Policy in the areas of asylum and migration.

The purpose of this survey is to gauge public opinion of European Citizens on current challenges, strategic priorities and key actions for the development of a common EU Policy in the areas of asylum and migration. Another aim is to understand perceptions and attitudes of citizens towards migrants, immigrants and refugees and towards various migration policy options, and to understand the awareness and knowledge about the phenomenon and the s.c. “new multicultural scenario”.

The survey is conducted as part of the project “Migrations, Integration and Co-Development in Europe” co-funded by the Europe for Citizens Program of the European Union.

We would be very grateful if you could take a few minutes and answer it.

If you experience any problems with the survey, please contact Associazione Prism at info@associazioneprism.eu