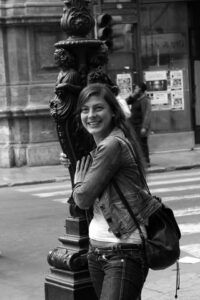 Boyka is one of the three founding members of Inter Alia. She is responsible for monitoring and advising on the execution of all projects carried out by Inter Alia and their financial aspect. Boyka heads the organisation’s mobility department and coordinates the network in Europe and beyond. She is an international trainer in non-formal education and has worked in different European countries as well as in Africa, Asia and Latin America. She has co-authored and managed numerous projects in the fields of youth work, youth policy and youth empowerment. She is drawn by feminist theory and intersectionality and works on ways of applying the respective concepts in her work at Inter Alia. Boyka has specialized in European project management at CESIE, Palermo, Italy (2014-2015). In the past she has worked as a Research Fellow and Student Coordinator at the Institute of International Economic Relations (IIER) in Athens (2010-2014) while she has previously worked in the financial departments of different banks and companies in Greece and Bulgaria. Boyka holds a BA in Finance and Banking Management from the University of Piraeus (2007) and an MA in Southeast European Studies (2008) from the University of Athens. She is currently pursues a Master Programme in Gender Studies “Intersectionality and Change” at Linkoping University. Boyka is fluent in English, Greek, Bulgarian (native) and Italian, while she also speaks Russian and German.