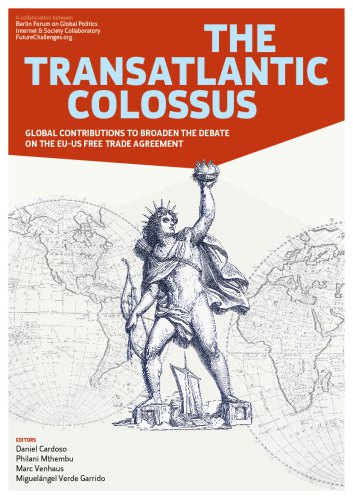 ‘Global Contributions to Broaden the Debate on the EU-US Free Trade Agreement’ (2014), a publication from the Berlin Forum on Global Politics in collaboration with the Internet & Society Collaboratory and FutureChallenges.org of the Bertelsmann Stiftung.

The free trade agreement (TAFTA | TTIP) currently being negotiated between the United States and the European Union has the potential to significantly impact the lives of people on both sides of the Atlantic and across the world. Because it is crucial to broaden the debate on this topic of global importance, our partners from the Berlin Forum on Global Politics, in collaboration with the Internet & Society Collaboratory and FutureChallenges.org of the Bertelsmann Stiftung, decided to send out an international call for papers in order to collect a strong plurality of views on TAFTA | TTIP.

The result is an open knowledge publication, freely accessible under its Creative Commons license, which includes 22 articles written by a multitude of well-informed global stakeholders, members of civil society, academia, think tanks, consumer and activist groups, and business organizations.

The articles address the impact that the agreement could have on a wide variety of areas: from the quality of food to the fair use of cultural and intellectual materials, from the protection of digital consumers and their privacy to the costs of medication, from the exclusion of developing and emerging economies to the potential demise of the global multilateral free trade order, and from European integration to the bypassing of national and EU courts through investor-state dispute settlements.

Despite the fact that TAFTA | TTIP is a colossal undertaking that concerns us all, the negotiations are moving at a very fast pace: although they officially started in July 2013, three negotiating rounds have already taken place. Criticism towards the way the negotiations are being conducted is also already growing, especially concerning the lack of transparency of the negotiations themselves and the meager debate on the effects of the agreement for societies in the European Union, in the United States, and in the rest of the world.

We hope that the publication deepens the discussion on the magnitude of the agreement and its widespread social, political, and economic implications for EU and US citizens, as well as for those citizens of third countries.

The Berlin Forum on Global Politics will be thankful if you share this publication with other individuals, groups, and institutions that may have an interest in the negotiations and their implications. Also, they are open to any feedback, in the hope that it will help nurture a dialogue between divergent perspectives and contribute to the ongoing discussion by expanding the diversity of actors and informing a wider audience.

Download the full text in .pdf, .epub, and .mobi file formats at: http://bfogp.org/publications/the-transatlantic-colossus/.