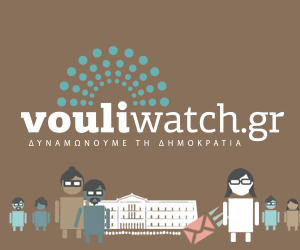 An interview with Toni Schwarz, founder of the Vouliwatch Platform

Tell us a few words about yourself, how you decided to move to Greece

My name is Antonis and I am of Greek-German origin.

After having worked for the Ashoka Germany office and the venture philanthropy fund Bonventure, I became interested in helping scale successful social businesses from abroad to Greece. After some research and discussions, it emerged that parliamentwatch would be a perfect fit for such an undertaking. During my master studies at IE Business School, I used my free time to plan my move to Greece.

I wanted to return to Greece to try and do my part to fight the crisis, which is, first and foremost a cultural crisis. Beyond this, I also wanted to re-boost my relationship with the country after living so much abroad. I simply missed the friendly people, the sun and the good food!

Do you really see opportunities in crisis-ridden Greece? In economic terms?

Opportunities always exist for those that are willing to see them. Yet after trying hard, I have to be honest that at the moment the economic opportunities for young people in Greece are limited. Having said that I really do see a lot potential in the e-commerce / tech-start-up, agricultural and tourism sector.

There is a great deal of young people leaving Greece these days; yet you took the opposite flight. Can you make a snap-shot comparison of the two countries in social terms?

Munich and Bavaria are quite different from the rest of Germany, so I will allow myself to re-focus the question to this location. Munich and Athens are as far apart as two cities can possibly be inside Europe in every term. For me, the Greeks have a better humor and enjoy life more. On the other hand, Greeks do not care much about the environment and many Greeks (especially from the older generation) tend to think that they know everything. From my point of view, the differences are most visible in the professional sphere: The Germans as a general rule, are more professional and work more efficiently. In Greece, things tend to require more time.

Vouliwatch is a digital platform that engages Greek citizens with legislative politics and grants them with the opportunity to communicate, evaluate and hold elected representatives in the Greek and the European Parliament (MPs & MEPs) accountable.

Vouliwatch is an independent, non-profit initiative aiming to promote public dialogue, knowledge, political participation and accountability between citizens and politicians. More specifically the platform offers the users the possibility of publicly asking a question to member of parliament or European parliament. Furthermore, user can crowdsource ideas for legislation and discuss the “topic of the month”.

Do you see it taking solid ground in Greece? Is it working in other countries outside Germany and what is the time horizon you give to yourself to make it work?

It is still too early to determine where we will be one day. We are still at the beginnings, but I do see the project gaining considerable momentum. Yesterday for example we had the first answer of an MP come in, which brought great excitement to my team, since the MP is also an important minister. I do not have a horizon for the project, since I hope that the project will become a citizen institution and be there forever.